The cast iron in cast iron pans isn’t technically black. At least, not naturally. The black you usually find on pristine, out of the shop cast iron pans these days is a presale coating which acts as the first few layers of a process with which you will become extremely familiar, known as seasoning.

Contents show
1 It does what-now?
2 But why is it black?
3 Why is my cast iron making my food black?
3.1 Possibility #1 – Broken coating
3.2 Possibility #2 – Seasoning oil build-up
3.2.1 Solution – Clean your pan
4 Possibility #3 – Carbonized whatever-the-heck-you-ate-last-time
4.1 Related Posts:

Before you freak out about historic layers of oil or grease on the inside of your pan, relax. Firstly, it’s meant to be that way. And secondly, at least for the most part, you’re not going to taste that ancient, cooked-in oil. 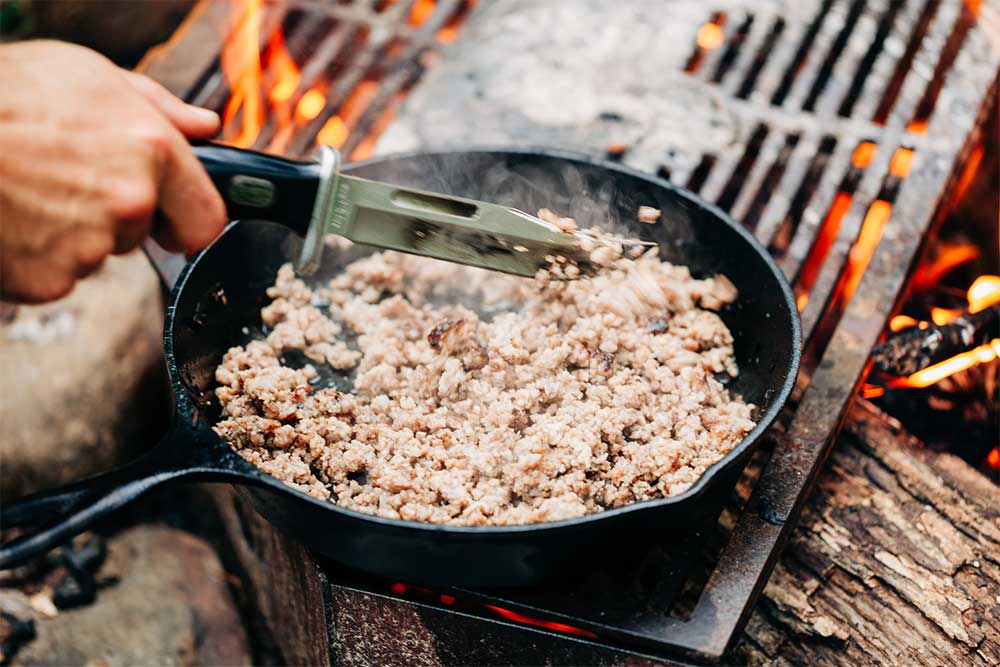 You’re not going to taste it because the oil for the most part doesn’t stick around as oil. It polymerizes in the pan.

There are a couple of ways of thinking about this. Imagine a wall. Now imagine a wall with cracks, and holes, and pits in it. What do you do before you can paint over that wall? You grab some Spackle (other fillers are available), and you fill in the holes and smooth over the cracks, right?

It’s the same with lots of other things from primer on a car to foundation on a face. You prepare the surface to take what’s coming next.

If you have a totally unseasoned cast iron pan, you have two problems. The first is that exposure to the air – especially damp air – will start an oxidation process. If you’ve been alive any length of time, you’ll have seen this oxidation process at work. It’s called rust.

Cast iron + rust – nooooooo! Bad idea. Really bad. Like eating mouldy bread – but with metal. So, most manufacturers these days pre-treat their cast iron pans with an initial pseudo-seasoning to seal the iron away from the air as much as anything, and so protect your pan against rust.

The second is that cast iron in and of itself is rarely smooth at the microscopic level. Like our skin, it’s prone to dents, pits and micro-craters.

So, if you have an unseasoned cast iron pan, and you cook food on it, it’s kind of like driving very slowly on a tarmac road in the desert. When the heat bonds your tires to the hot surface, you’re going absolutely nowhere for a while. It’s the very opposite of non-stick, and what you’re going to have then is a pan that has bits of whatever you tried to cook in it, trapped forever in the pores of the cast iron.

So again, manufacturers these days start you off with a coating that gives you at least a start towards your non-stick cast iron cooking future.

But why is it black?

More than anything else, because of consumer expectation. This is where it gets a bit strange. We as human beings have an expectation that cast iron pans – unless they've been enameled, in which case, by all means, taste the rainbow – will be black.

Why do we expect that? Because before the manufacturers took to starting us off with a pre-season coating so we could, if we wanted to, take a cast iron pan home and cook on it immediately, most of the cast iron pans people saw… were black.

They were black because they’d been seasoned, meal after meal, week after week, year after year by the time most people encountered them. So, in the public consciousness, a standard cast iron pan – is black.

And when you season yours, as you must do if you want it to serve you for decades as a cast iron pan should, you’ll notice that yours loses that ‘just-bought’ look, and takes on the seasoned, oil-polymerized black of a pan well used and never scrubbed with harsh chemicals or tools.

What’s more, the more you season your pan, the more reliably non-stick it will get, and the less likely you are to lose any of the manufacturer’s pre-seasoning black coating while you cook. Season, season, season – it’s like oxygen to your cast iron pan. More oil, more polymerization, less stuck food, and less chance of your pan losing the ‘traditional’ black color.

It’s also possible that the black is additional to your manufacturer’s coating – in which case, maybe wipe out the pan, as you may have some pieces of charred food leftover from last time stuck to the surface. That’s not adding to your pan seasoning, that’s just slightly gross.

Why is my cast iron making my food black?

There are three main possibilities here.

If you’re cooking in your cast iron pan and getting flakes of the pan’s coating in your food: mayday. You’ll be able to tell if this is happening because you’ll see dull silver specks on the surface of your pan. That’s the cast iron underneath the coating. If that’s open to the air, your pan is prone to rust and sticking. You need to clean out the pan and re-season it immediately.

The quick way to re-season your pan is to put it in an oven for a while with a thin base coat of oil brushed over the inside surface. Polymerization of the oil should protect the cast iron from rust, stop your food from sticking in the pan, and give you many more years of cooking – ideally without turning any more of your food black.

We know we’ve told you to season your cast iron pan with oil regularly and often, and in essence that’s good advice. However, there’s usually only a thin layer of oil that polymerizes to the pan in each seasoning. If you’ve used excess oil, and you haven’t either wiped out the pan or rinsed it out in hot water, you might have a build-up of seasoning oil in the pan.

Here’s a test. Polymerized oil should not wipe off with a paper towel or a soft sponge. If it does, and if the oil that comes away is black, you’re carrying excess oil that might be giving your food a black tinge when it’s heated up.

How do you do that without resorting to scrubbers that could damage your seasoning layer?

Take a kitchen towel and oil it (ideally with the same oil you normally use to cook with). Yes, we know that sounds weird. Stick with it, we’re going somewhere.

Add salt to the bottom of your pan. Rub the salt around the pan with the oily kitchen towel, and be as vigorous as you can with it, without making the towel break up.

What you have there is a natural scourer that will clean away the excess blackened oil, without ruining your layer of seasoning. Rinse the pan in hot water to remove any lingering excess oil and the salt, and leave the pan to dry as normal. The next time you use it, you should notice significantly less black residue coming off the pan and coloring your food.

Probably the most likely of the three possibilities is that whatever you cooked last time, thanks to the somewhat more relaxed cleaning method for cast iron pans, got stuck, or more likely burned onto the pan. If you catch this relatively quickly, you should be able to softly wipe this away pretty easily.

If you’ve missed it for a few meals, what you’ve accidentally done is carbonized the ever-loving heck out of whatever food it used to be. Right now, it’s not so much food as a combination of ash and sticky hellfire, just waiting to make your food look bad, and probably, if swallowed, give you a taste of what double-roasted bitterness feels like.

Leave the pan to think about its actions for a while. It won’t make it very much easier to get rid of any carbonized food, but it might soften it slightly, so it comes loose with less work.

After 5-10 minutes, dump out the water and wipe the pan with a kitchen towel. If the former food comes free on the towel – success. If it simply lets you know it’s there by feel, run some more hot water, and, having identified the spot, work on it with a plastic or silicone scraping tool. Please note – not a metal one. Using your plastic scraper should allow you to find and remove the carbonized remains of meals past. Then rise again in hot water and leave to dry as normal.

Result – you should have no more blackened food unless you’re especially aiming for that effect on Cajun night.