From their nonstick pans (which means you won’t have to worry about burnt, dried out food) non-toxic constructions that are entirely free of chemicals, all the way to their durability and impressively long life spans - there’s no denying it - there’s a lot to love about cast iron skillets!

However, one of the biggest downsides that many cast iron skillet users encounter is black residue. Not only does it look off putting and unsightly, but it often causes many to ask the question - “What is the black stuff across the surface of the cast iron?” - that’s where we come in. Read on to discover what it is! 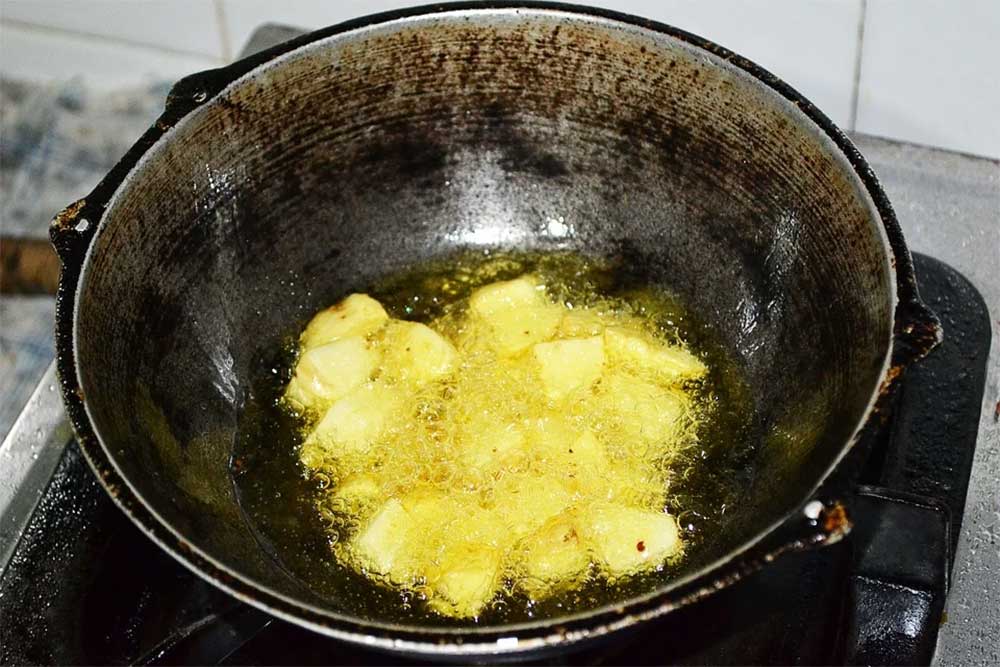 Whether you’re a professional cook or you’re just starting out, if you’re working with a cast-iron skillet, chances are that you’re going to notice some black residue situated mainly across the base of the skillet (or the part of the skillet that cooks the bulk of the food).

Though it might not look the most appealing, the good news is that the black residue situated across your cast iron skillet is not harmful, and is usually just something known as carbon deposits.

In a nutshell, carbon deposits can be caused by the overheating of food, fats, and oils, and can sometimes even simply be little remnants of burnt food that didn’t make it out of the pan.

The first main culprit that could be causing black residue to accumulate across the surface of your cast iron skillet is burnt food. Carbon residue can often form from little bits of food that have gotten stuck to the base of the pan and not washed off.

This then allows the carbon to dry out and become black in appearance, which can negatively impact the taste of any future foods that you choose to cook in the skillet, especially as the heat will be able to further char the carbon particles.

The charred black residue can then be very difficult to clean off through the standard methods of either hand washing or putting in the dishwasher and will likely require strong dish detergent and a wire scrub to help lift the burnt particles away.

One of the most overlooked causes of black residue in cast iron pans is oil or wax. If you’ve recently purchased your cast iron skillet and depending on which manufacturer you went with, your cast iron skillet would have come with a layer of oil or wax-coated across the interior of the pan upon purchasing. This is intentional and is often included as the last step of the manufacturing process in order to prevent any rusting prior to being sold.

Many people do not always notice this protective coating, which means that it does not get washed off until after the pan has already been used for cooking, at which point the protective coating will have been exposed to heat, causing it to burn and leave behind charred carbon particles.

Last but certainly not least, the last main cause of black residue in cast iron skillets is overheated fats and oils. There is a great variety of cooking oils on the market, and not all of them are able to burn at high cooking temperatures.

For this reason, it can mean that oils that are not able to withstand extremely high temperatures can carbonize if their maximum heat limit is exceeded, which ultimately causes black residue.

If you suspect that the overheating of fat or oil may be the reason for your black residue, then you will need to use a strong cleaning detergent and bristle brush so that you can scrub it off the pan as, when oil or fat charts and sticks, it’s extremely hard to remove.

How do I get the black stuff off my cast iron pan?

Prevention is always better than correction, so one of the best things that you can do to prevent black residue from forming on your cast iron pan is by ensuring that you are thoroughly cleaning your pan after every use, following the correct cooking instructions, as well as using proper techniques.

All of these factors combined will help to ensure that you do not overheat your oils or cause any food to stick, which will help to prevent the chances of carbon particles charring and accumulating across the surface of your cast iron pan.

However, regardless of whether you’re a professional cook or your journey in the kitchen has only just begun, sooner or later you’re going to find that accidents happen that can cause a buildup of black residue in your cast iron pan. For those moments, follow the steps below to rid your pan of any unsightly residue:

As a side note, though the above method is usually very effective, it may not work for particularly stubborn stains of black residue, especially residue that has become quite caked and thick. If you find yourself struggling to remove the residue via the salt method above, you could alternatively choose to soak the pan in hot water and detergent for 30 minutes, and then thoroughly scrub it with a brush and this should help to successfully remove it all.

Failing that, a drop of isopropyl alcohol will certainly do the trick, although be extra careful to thoroughly clean your cast iron skillet prior to cooking with it again, as rubbing alcohol/isopropyl alcohol can be dangerous if consumed, or ingested.

More often than not, black residue buildup on the surface of your cast iron pan is likely going to have been caused by either burnt food or overheated oil, which are two easy cooking mistakes to make.

When either of these two cooking mishaps occurs, it can lead to the forming of carbon particles due to the high temperature and sticking to the pan. The carbon particles then char from the heat, causing them to adhere to the pores within the surface of the skillet pan, and turn dark in color.

Though the black residue on your cast iron skillet might look unappealing, it is completely harmless and not necessarily a bad thing, as some people like to use it as a non-stick surface for cooking. However, if you’ve noticed that a black residue has built up and become thick, then you’ll want to take some steps to properly remove it.

Not only can black residue affect the quality and flavor of your food, but it can also prevent the pan from heating the food evenly throughout the pan, which can lead to your food also being undercooked.

Though a little bit of black residue on the bottom of your cast iron skillet won’t necessarily be a bad thing, the best way to prevent black residue from building up is to make sure that you are regularly cleaning your skillet after use, as well as ensuring that you are using correct techniques and following instructions to prevent any cooking accidents from occurring.