Lodge has been making cast iron since 1896 and is the only remaining manufacturer in the United States. With that kind of reputation to maintain, they have a lot to prove with their Seasoned Cast Iron Skillet!

But does this highly-rated cast iron pan live up to expectations? We took a deep dive into its features - from how it’s designed and what it’s made of, to how easy it is (or not) to clean, and, most importantly, its value for money.

The design of the Lodge 10.25-Inch Seasoned Cast Iron Skillet is best summed up as classic. Its perfectly sized handle is long enough to grasp but short enough to provide sufficient leverage for lifting these traditionally heavy pans.

When the pan is full, the helper handle does exactly what it says on the tin. It helps you carry the heavy pan, and both handles have loops for easy storage. If you like to hang up your cookware, this may be the pan for you!

The spouts are handy for pouring out grease such as bacon fat and though they’re quite small at 1.25-inches by .25-inches, there is little spillage. The 2-inch-high sides give enough cover for shallow frying without too much splatter, but you miss the lid.

Of course, weight can be a deal-breaker when it comes to cast irons. The Lodge 10.25-inch Seasoned Cast Iron Skillet weighs in at 5 pounds. This is relatively lightweight when cast iron pans usually weigh in at 6 pounds or more. Its lightness gives this pan the edge and makes you want to return to it time and time again. The pan is a versatile size too, at just over 10 inches in diameter. It can sear large steaks on the stovetop just as well as it can bake crunchy cornbread.

The Lodge branding is adorned on both the helper handle and the flipside of the pan. While Lodge’s website states that the cast iron works great on glass cooktops, we would advise being cautious for use on a delicate surface, as the logo and name cast into the bottom of the skillet may lead to scratching.

As the name suggests, this skillet is made of cast iron. This material is known for its durability and ability to hold heat. This pan does seem to take a bit longer to heat up than its rivals, but once it has heated up it holds heat well. We recommend letting your pan gently preheat for 5-10 minutes - starting low before building up to medium - before adding a splash of oil and getting started.

It can withstand up to 600°F - higher than most home ovens can reach - so you’re unlikely to overheat it.

The Lodge 10.25-inch Cast Iron Skillet comes pre-seasoned with highly refined soybean oil. If you have a soy allergy though, don’t fear. All proteins that trigger soy-related allergies have been eliminated. Nearly all cast iron pans made in the last decade are pre-seasoned, but Lodge claims to be the first to introduce this concept. They also claim the pan is ready to use right out of the box, but you may find the skillet a bit underwhelming when putting it to the ultimate test: cooking an egg.

Customers have reported mixed results with the pre-seasoning, especially when preparing eggs sunny-side-up. Even when using the pan straight out of the box without oil, then with a thin layer of oil, and then after the pan had been twice seasoned with a layer of oil, customers reported a very thin layer of egg sticking to the surface. However, this was easy to clean.

The skillet’s ability to retain heat by the browning achieved was also tested too. After baking cornbread in a preheated pan, the Lodge developed only a light crust by the time the bread was ready, and a third was stuck to the bottom.

The Lodge 10.25-Inch Seasoned Cast Iron Skillet is a slightly rougher pan than its rivals, which may explain why it clings to food somewhat even after seasoning. Of course, you do need to be patient with cast iron pans, as they become smoother and more nonstick with use and more seasoning. However, if you really can’t abide the texture, Lodge does advise using a fine grade of sandpaper to smooth out rough areas. But remember to re-season before using!

Is it easy to clean?

Now that we’ve done some cooking with the Lodge and tested its non-stick ability, let’s take a look at how well it cleans up. Like all cast iron cookware, you cannot put this skillet in the dishwasher, only hand-wash it. This puts some people off buying and using cast-iron since we’re now all so used to using dishwashers, not to mention soap!

But allowing fat to build up helps make the pan more nonstick, which produces better results and makes the pan last longer. Once you’ve used the pan enough times and it has built up a strong seasoning, to clean the pan all you need to do is wipe off any excess food and you’re good to go. 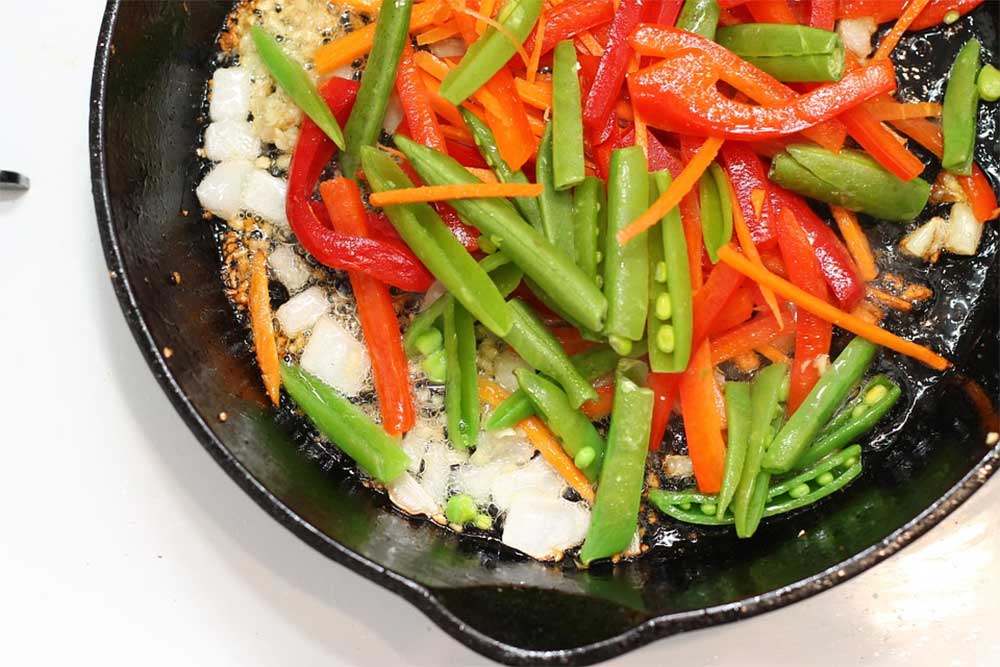 However, if you want to add a little elbow grease, pour in a generous amount of salt and then dislodge any stuck-on food with the coarse grains. If something has burned though, you may need to pour some water into the skillet and return it to a medium flame on the stovetop until the water simmers, softening and removing any gunk from the surface.

However, if you’re not comfortable forgoing soap and water, it is okay to lather up. The golden rule of cast iron cleaning is that you can’t leave the pan to soak, and you must dry it immediately after washing to avoid rust. According to Lodge, “even a droplet of water sitting in your cast iron pan can leave a rust spot.” However, a pan developing a small amount of rust isn’t the end of the world. All you need to do is scrub it out and re-season.

When cleaning this Lodge skillet specifically, a combination of the above is recommended. Scraping off any remnants of food and adding room temperature water while the pan is still hot does the trick for cleaning any leftover egg. This pan tends to get better over time, as with each use it becomes easier to clean. Soon, egg protein will roll right off with a nudge after sitting in hot water for a minute. All you need to do then is give the pan a quick wipe with a towel, and then thoroughly dry it all over.

Is it value for money?

At over $60, this particular Lodge Skillet is pricier than its similarly sized rivals. However, the Nokona leather handle holder is what bumps the price up. If you take the holder away, the skillet can be found in big-box stores for as little as $15 - a staggering drop in price and a great bargain! And while the handle holder is nice, it certainly doesn’t justify the $40-plus premium.

T-Fal is synonymous with nonstick pots and pans. They invented the very first, after all, and those first pans patented with Teflon material are iconic. Therefore, it makes sense to pit two storied companies together, and compare the Lodge 10.25-Inch Seasoned Cast Iron Skillet with the T-Fal E83407 Pre-Seasoned Nonstick Cast Iron Skillet.

Unlike the Lodge, the T-Fal is highly nonstick with minimal seasoning, but they both have an impressive heating capacity.

However, the T-Fal is extremely heavy with a handle that is hard to grip, while the Lodge is lightweight and has a handy helper handle when the pan is full. Although neither of them is ideal for glass cooktops.

So while the T-Fal E83407 Pre-Seasoned Nonstick Cast Iron Skillet’s slick, pre-seasoned surface is tough to beat, we would still opt for the more manageable 10.25-inch model instead.

But the Lodge’s cast iron pre-seasoning can’t compete with T-Fal’s, and even though the 10.25-inch skillet (without handle holder) costs about $10 less than its T-Fal counterpart, the $10 discount pales in comparison to the time required to build up a genuine nonstick surface. But the Lodge Skillet truly has the edge when it comes to weight, at just 5 pounds. While the T-Fal weighs close to 6 pounds.

It’s a tough call, but pre-seasoning wins out and we would recommend the T-Fal 10.25 over the Lodge despite being slightly heavier and more expensive (sans Lodge’s handle holder, of course).

We liked how lightweight the Lodge 10.25-Inch Seasoned Cast Iron Skillet was, as well as its versatile size and cleaning options. However, we were underwhelmed by how moderately nonstick it was after seasoning, and the expensive leather handle holder that added little value.

So while the Lodge 10.25-Inch Seasoned Cast Iron Skillet is lightweight, versatile, and American-made, the pan’s pre-seasoning isn’t exactly nonstick. While it is a quality item that will last for years, we recommend only purchasing it if you’re willing to see results after seasoning several times.