When it comes to vintage vs modern cast iron, the majority of cast iron users unanimously agree that vintage cast iron is better.

While you may assume that they are both equally good as the other, interestingly this is not the case for some collectors. Vintage is used to refer to any type of cast iron skillet that was made before the 1950s.

While this is still fairly recent, when you take into consideration the typical lifespan of a skillet, it is easy to see why this is vintage.

The most important thing to remember when it comes to vintage vs modern cast iron is the materials that are used. There is no real difference in the main material, which is cast iron. As a result, both types of cast iron are very similar.

What makes modern and vintage cast iron different from each other is the process in which they were created. In the pre 1950s, cast iron was not created on a mass scale in the same way that it is now. 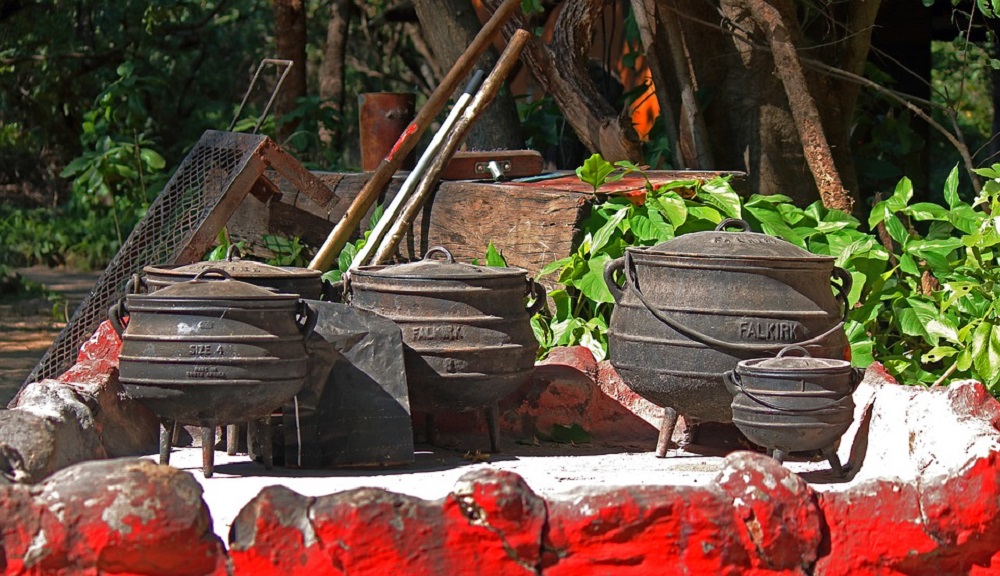 Given this, more time was taken in the manufacturing process. This meant that the cast iron was thoroughly polished before it was sold. In addition to this, it was poured by hand, into sand molds. Modern skillets are not created in this way.

Nowadays, cast iron is not polished in the manufacturing process. Instead, it is pre-seasoned, which causes the skillet to be grainy rather than smooth.

While some people believe that this allows the food to cook more evenly in a vintage pan, others state that there is no difference when using a modern pan that has been seasoned correctly.

If you are interested in collecting and using vintage iron skillets, then the older models will be your preference. If you are looking to purchase cast iron for the first time, there are no issues with modern day skillets, as long as you ensure they are made well.

How can you tell if a cast iron skillet is vintage?

There are a few ways you can tell whether an iron skillet is vintage. When it comes to cast iron, the vintage marker is important, especially for collectors. While modern iron skillets are great, the majority of people prefer to own a vintage one where possible.

The easiest way to tell whether a cast iron skillet is vintage is by checking its surface. Vintage cast iron created before the 1950s will have a smooth and polished surface.

Modern cast iron skillets have a grainy surface. This is due to manufacturing methods. Whereas vintage cast iron was created slowly and polished thoroughly, an increased demand meant that modern day cast iron was not polished.

As there is a clear difference in the feeling of the pan’s surface, this is a great way of finding out whether cast iron is modern or vintage. Another way to determine whether your cast iron is vintage is by looking at the manufacturer mark on the bottom of the pan.

The most popular vintage manufacturers are:

If the insignia is of one of these brands, then it is very likely that your cast iron skillet is vintage. Out of all the companies, Griswold Manufacturing are typically seen as the best, and most valuable.

If you have used both of these techniques, and are still unsure of whether it is vintage, you can check the handle of the cast iron skillet.

While this number merely represents the size of the skillet, the way in which the numbers are set out can be an indicator of the skillet’s age. This is an example of the numbers on a vintage skillet, #13-12” and #14-13”. If your skillet contains numbers set out similarly, there is a good chance that it is vintage.

If your cast iron skillet does not contain any of these indicators, this does not mean that it is not vintage. In some cases, there were vintage skillets created without any markings to enable them to be sold for a lower price. Without the markings, it is far more difficult to identify whether the cast iron pan is pre or post 1950.

Though it is still possible. You can choose to take your skillet to an antique dealer to inquire about whether it is vintage. If they have experience with cast iron, they may have a good idea of whether it is, or not.

Alternatively, you can compare your skillet to photos from search engines. However, this will not determine that this is the correct age of your skillet exactly.

Interestingly, modern skillets do not typically have two pouring spouts. While some do, the majority will only have one. Given this, if your cast iron has two spouts that are not very deep, this can be a good sign that it is vintage.

The most important thing to take into consideration when purchasing new cast iron is how well it has been made. If the quality is not overly great, vintage cast iron is likely going to be better.

But, if the new cast iron is well made, there is little difference between the two.Many people prefer vintage cast iron in comparison to new cast iron because it has been polished in the manufacturing process. In contrast to this, newer cast iron is grainier.

However, this makes little difference when it comes to cooking with the cast iron pan. While many people will state that vintage cast iron will cook more evenly, and are more durable, this is not necessarily true. This ultimately depends on the type of cast iron pan you own.

What should I look for in vintage cast iron?

If you are choosing to purchase a vintage cast iron skillet instead of a new one, there are a few things you will want to take into consideration.

The most important thing to consider is the quality of the skillet. You will want to ensure that it is still in working condition, and is not damaged in any way. Damage can affect how well the skillet cooks food.

Over time, vintage cast iron can begin to warp. The skillet you purchase should be flat when placed on a surface. If it is uneven and can be moved back and forth significantly, this is a sign of warping.

While you can still cook food in a warped pan, this can affect the overall quality, and the pan could potentially fall while you are cooking, which can be dangerous.

If the cast iron has pitting on the surface, this will affect how well you can season the pan. Given this, if you spot any pitting, we would recommend not purchasing the vintage cast iron.

Another aspect you will want to avoid is cracks, as this will affect the overall quality of the pan and how successfully it cooks food. If you are looking for a vintage cast iron skillet, you will ideally want to choose one that has been marked by the manufacturer.

This will help to identify when the skillet was created and how old it is. As there are some manufacturers that produced more valuable skillets than others, this is worth noting.

However, you do not need to purchase a skillet that is branded if you are not overly bothered about the manufacturer. The most important aspect to consider is the quality of the skillet as a whole.

The first and most obvious difference is that older cast iron has a higher value. If you own cast iron that is branded, and can be clearly dated as pre 1950s and vintage, this potentially holds value.

When you take this into consideration, it is clear to see why older skillets are seen as the better option.

It is worth noting that not all older cast iron skillets will be sold for this price. This depends on its age, brand, and the quality of the pan as a whole. To purchase, old cast iron skillets are typically more expensive than modern skillets.

In addition to this, many people prefer to use vintage cast iron skillets because they are thinner and lighter. While a thinner skillet does mean that it is slightly less durable, it does weigh significantly less. Cast iron is heavier than other materials used for skillets.

As a result, if a lighter version of the cast iron can be purchased, many people would prefer to use this, especially if you need to move the skillet while you are cooking.

Finally, many people class vintage cast iron as better because it was not created in a mass produced way. The manufacturing process was a lot slower and involved the pans being polished thoroughly before being sold. Modern skillets have a grainier surface, which collectors are not as fond of.

To summarize, there is not a hugely significant difference between modern and vintage skillets. As a result, one is not necessarily better than the other, unless you are looking to make a profit, and want to purchase a lighter pan overall.