A cast iron skillet is one of the most useful bits of culinary gear you can kit your kitchen out with. They just do so much! But cast iron is also a famously high-maintenance material.

Forever bombarded with horror stories about overexposure to water, and relentless warnings to keep our prize cast iron out of the dishwasher, it leaves many in the dark about what they should and shouldn’t be used for.

For example, if they’re so sensitive to moisture, is it even possible to boil water in them? Well, I’m happy to report that as long as your cast iron dynamo is sufficiently seasoned, you should be able to boil water to your heart’s content. 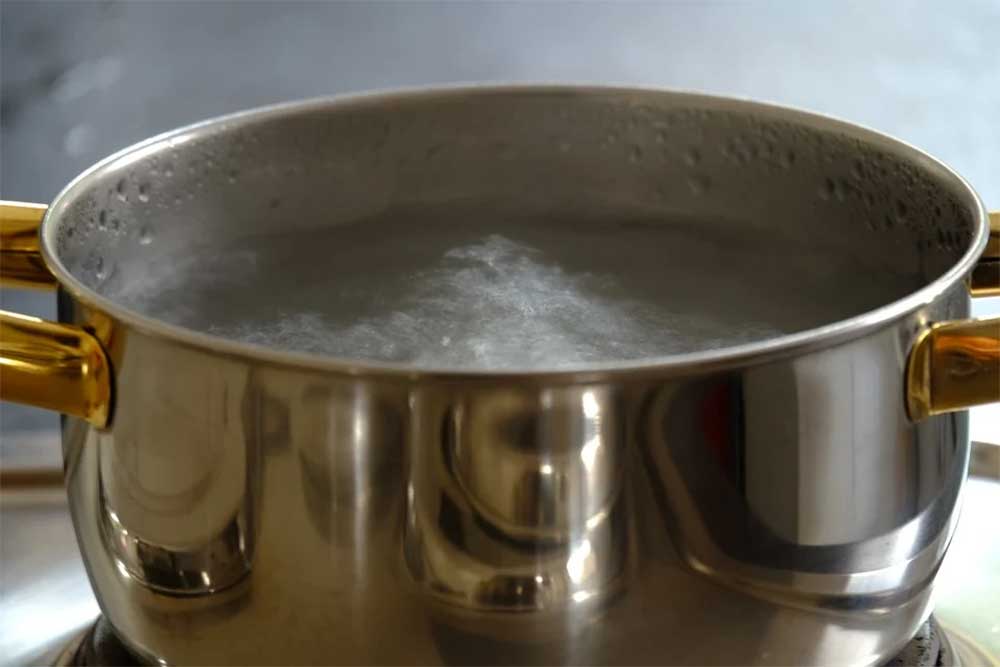 That’s right, culinary chums, let your worries dissolve into the piping hot pan of water you’ve got on the hob. Why is this the case? Well, to answer that question we have to talk about what seasoning actually is.

You can put the salt and pepper away, friends — that’s a different kind of seasoning. Put succinctly, the act of seasoning in this context is building up a protective polymer layer over the surface of a pot or skillet using oils. It’s achieved by massaging a high smoke point oil into your cast iron cooking surface, then heating it and letting it cool, sometimes repeatedly.

The oils fill any pores or imperfections in the surface of the pan, then solidify, giving it a slippery, non-stick effect, but that’s not all it does. It also makes your cooking utensils much easier to clean, and protects them from rusting.

With this protective coat in place, the water cannot reach the cast iron, and so it can’t rust, but would I recommend using your cast iron skillet to boil water? No, it’s probably not the best way to do it.

The reason being that boiling water will degrade your seasoned layer. This happens over time anyway, but water fast tracks the process and can leave you with a patchy pan. In light of this, it’s much better to use a steel or anodized aluminum pan to boil water.

Should you wish to go ahead with your plans to heat up some water in your cast iron pots, as long as you remember to re-season your pan afterward, you’ve got nothing to worry about.

That said, there are a few things to bear in mind when taking this route. Firstly, you should never heat up your cast iron pan then add cold water to it. The shock of conflicting temperatures can cause warping or in some cases even cracks. Neither should you flip this scenario and add boiling water from your kettle into a cold cast iron skillet — it’s a recipe for disaster.

Once your cast iron pan is warped, it’s still usable to an extent, but as it won’t sit evenly on your hob, it’s not very safe, especially if you’re boiling a large amount of water in it. Warping also means that you can kiss goodbye to that even heat transfer. Simply put, some of your food might be burning, whilst other areas of the same food will be uncooked.

Can I boil pasta in cast iron?

As we’ve already established that you can use your cast iron pride and joy to boil water if you really want to, it stands to reason that you can prepare some pasta in it too, right?

Fortunately, that is correct! You can cook up a big old batch of your favorite pasta shape in your cast iron and as long as it’s seasoned, you shouldn’t have to worry about rust or any other scary stuff internet forums are a-buzz with. However, there are a few things that you need to be wary of when using your cast iron for a tasty Italian meal.

I know you’re hungry; I am too, but we should really discuss these little caveats before we hit the kitchen and throw together some delicious cast iron-made meals.

When you throw caution to the wind and use these acidic ingredients anyway, there’s a good chance that the metal from the surface of the pan will leech into your food on a molecular level — sounds gross, dangerous even, right?

Well, the good news is that, unlike some other metals, our bodies actually need an iron content. Have you ever noticed the metallic taste of blood when you cut your lip? That right there...that’s iron; our blood is lousy with the stuff, so a small dose in our food isn’t the end of the world.

The negative side of this unwarranted molecular trade-off is that the food you’re cooking in your cast iron pan will take on that familiar metallic undertone we can taste in our blood. It’s normally only subtle, but it can be pretty hard to ignore.

As long as your cast iron pan is seasoned to perfection, your pasta is most likely going to survive boiling without taking on any unwanted metallic passengers. It only ever takes around 10-15 minutes for pasta to boil, which is a safe amount of time in a seasoned cast iron pot.

It’s only really a problem if you like to add your tomato-based sauces to the same pan you cook your pasta in. Teeming with acid, tomatoes will kick the leaching process into hyperdrive, seasoned pan or not. It’s not exactly an instantaneous occurrence, but if it’s in there for upwards of 15 minutes, you can expect a change in flavor.

My advice is to boil your pasta in your cast iron cookware, then before you add the sauce, transfer the pasta to a different non-reactive pan. I know, I know...more washing up, right? But it’s a much safer option in the grand scheme of things.

If doubling up on the washing up gets a big “NO” from you, I understand. I hate washing up too. But the only way to avoid a stint in the sink and preparing the dishwasher is to have a heaping helping of metal in your food - which I’m guessing you don’t want - or to use a non-reactive pan for cooking your pasta in the first place.

As I’ve already touched upon, boiling water in your exquisitely seasoned cast iron pan will be detrimental to its pristine polymer coat. There’s no way to avoid this other than being incredibly quick with your boiling activities.

It’s not just cast iron pans’ seasoning that’s at risk when boiling water, but any kind of metal. Extended exposure to hot, turbulent moisture releases the polymer bonds of the seasoning and unhooks it from the surface of your pan.

Think about when food catches and sticks to a pan. What’s one of the easiest ways to loosen it off before cleaning can begin? A nice, long soak in some piping hot water. The heat softens the food matter and eases the bonds holding it fast to the surface of the pan.

The principle is roughly the same when you boil water in your seasoned pans. The hot moisture does everything in its power to separate any substances that have adhered to the metal surface.

While one boiling session may not completely strip your cast iron pan of its protective layer, there’s a good chance there will be inconsistencies in the surface.

If you really want your cast iron cookware to last, you should re-season it after every use, but this applies doubly if you’ve used them to boil water. Adding another protective coat will fill the gaps in the previous seasoning, and reinforce the surviving areas.

Ultimately, I’d say that boiling water in your cast iron is a pretty bad idea. It seems unnecessary, and quality cast iron pans aren’t exactly cheap. Risking ruining the perfectly good one you already own isn’t worth it. It’s always best to just use a non-reactive pan to boil water in.

This doesn’t just apply to water, but any high-moisture food that requires boiling for a significant period of time. Soups, for example, should only be cooked in non-reactive pans. Even a tin of saucy beans will accrue little black flakes from the surface of your seasoned cast iron pan, and those little black flakes are your seasoning chipping away into your food. It’s perfectly edible, but it’s always best to keep your pans on top form and your food as clean as can be.

If this article finds you too late and you need to replace a damaged cast iron skillet, this Lodge Pre-Seasoned Cast Iron Skillet is my personal favorite at the minute. On the other hand, if you’re short on non-reactive pans, this Misen Stainless Steel Frying Pan should hit the spot.