Cooking with cast iron pans is a great way to cook so many different foods. They are versatile and cook food incredibly well and evenly. They are also incredibly well-made and will last a lifetime, if not longer. This is cookware that you will probably find yourself putting in your will.

Some people argue that cooking with cast iron is healthier than cooking with other pots and pans. But this isn’t necessarily true. Others will argue the opposite as cast iron pans need to be seasoned, which means coating it with oil and baking it several times. Due to the presence of so much oil, some people believe this to be unhealthy. But some oils, such as extra virgin olive oil, are actually good for you.

Cooking with cast iron is a great idea if you can afford to invest in a good quality pan. It will improve your cooking, but it won’t necessarily be any healthier than cooking with any other cookware. 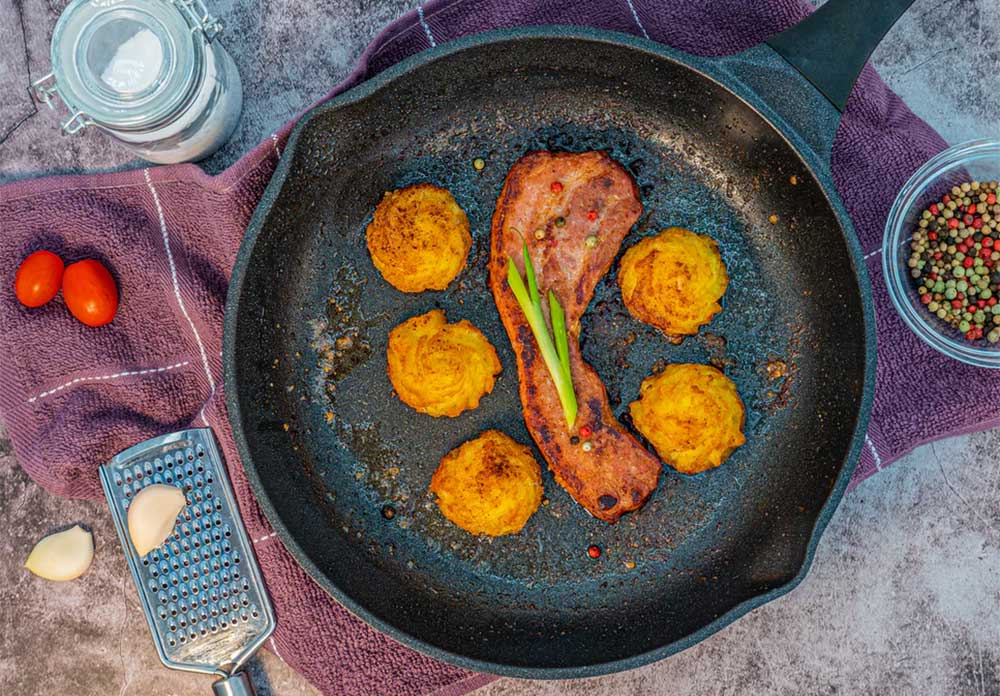 Is cast iron the healthiest cookware?

Cast iron is often argued to be the healthiest cookware as it is not treated with chemicals and is purely made from iron. But, others argue that it is unhealthy due to the issue of iron leaching (explained in more depth below).

Cast iron is definitely one of the best ways to cook many kinds of food. But there is no real argument to say that it is healthier or less healthy than any other kind of cookware.

Some people believe cooking with cast iron pans is unhealthy, and even dangerous, due to something called “iron leaching”. This is when iron from the pan is absorbed by the food cooked in it. This will then of course be consumed and absorbed into the body.

Iron leaching is real and you can consume dietary iron from cooking food in a cast iron pan. This can be useful for people who have an iron deficiency or are anemic, as the food will absorb the iron naturally. It might mean that you can skip those disgusting iron tablets every morning.

In a study by the American Dietetic Association, it was found that the iron levels in a spaghetti sauce increased 895% from 0.61mg/100g to 5.77mg/100g after being cooked in a cast iron pan. For cornbread, the iron levels increased by 28% from 0.67mg/100g to 0.86mg/100g. This difference in iron leaching is primarily due to the acidity levels in the tomatoes in the spaghetti sauce. More acidic foods leach more iron out of the pan.

This is a huge increase for both foods. But it does show that the amount of iron leaching that occurs can depend on the type of food being cooked. Primarily, it depends on the acidity and water content of the food. Levels of iron leaching can also vary depending on how long the food needs to be cooked and the age of the cookware.

Cast iron pans also aren’t the only pans that leach minerals into the food cooked in them. A 1992 study found that stainless steel pans also leached iron into food. They also leached nickel and chromium, which are thought to be harmful to humans. But, it was not enough to actually cause any issues.

Overall, cooking with cast iron is no healthier nor less healthy than cooking with any other type of cookware. But it might be helpful if you have an iron deficiency.

Does cast iron cause cancer?

There is some evidence that having high levels of iron in your blood can increase the risk of cancer. As cast iron pans are made from iron and leach small amounts of iron into the food cooked in them, some people have drawn the conclusion that cooking with cast iron pans directly causes cancer.

As mentioned above, the levels of iron leached into the food vary by huge amounts and depend on the type of food being cooked. The levels of iron leached into food, especially from a seasoned pan or one coated in ceramic or enamel, are not high enough to cause concern. They do not come close to the recommended daily intake of iron, which is 8.7mg for men over 18, 14.8mg for women aged between 19 and 50, and 8.7mg for women over 50.

So, while you should keep an eye on your iron intake, you should not be too concerned about iron leaching from cast iron pans, especially if you have seasoned your pan (which you should!).

Do cast iron pans cause Alzheimer’s?

There is no evidence to suggest that using cast iron pans has a direct impact on whether or not you develop Alzheimer’s. The exact causes of Alzheimer’s are not yet known, however, studies have shown that people with Alzheimer’s generally have higher iron levels. But this is a classic case of correlation not showing causation.

What happens if you eat rust from cast iron?

If cast iron pans are not dried immediately and thoroughly after being cleaned, then they are very prone to becoming rusty. If the pan does become slightly rusty and you realize that small amounts of rust have gotten onto your food and been eaten, this shouldn’t be cause for concern.

Ingesting small amounts of rust will not have an impact. You will be fine if you have accidentally ingested a small amount. That said, this can be an issue if you have hemochromatosis, which is an illness that causes the internal organs to retain iron. But, if you do not have this, then you shouldn’t be worried, you just need to remove the rust from your pan for next time.

Removing rust can be difficult if there is a large amount, but still isn’t too hard. It can be easily removed by using a steel wool pad or other scrubbing tools. The main issue is that the scrubbing needed to remove the rust will likely also remove some of the seasoning. So you will very likely need to re-season the pan. This can be a bit of a process, but it will be worth it to remove the rust.

Not really, and there are plenty of cast iron pans that are specifically designed to be non-toxic. This means that they will be safe to use. There may be some risks of toxicity if the pan is used without seasoning and is very old. This will be due to iron leaching. But this is very unlikely and not cause for concern, nor is it a reason to stop or avoid using cast iron pans.

Not necessarily, but this does depend on what the black residue is. There’s a good chance that it is just seasoning, which is absolutely safe to eat. Black seasoning very likely won’t rub off onto food, but it will add to the flavor. So the chances of you ingesting it are very small, and even if you did it would be fine.

Some people argue that you should never clean your pan at all. But this is not necessarily true. Cleaning your pan too much is not part of how cast iron pans should be used. Every time you cook with your cast iron pan, you’re adding extra seasoning. It’s important to remove any build up that is getting in the way of cooking or negatively affecting the flavor. But this will take a very long time, at least several years.