Cast iron pans are generally considered to be the best for frying. They can be used for other purposes as well, but it is frying that they get their fame for. Cast iron pans are incredibly tough and can last for decades and only get better with age. This is because every time the pan is used, it becomes more seasoned. This additional seasoning adds even more flavor, so every time you fry something, it will be even more delicious than the time before.

Cast iron pans are also great for frying because they heat so evenly. This is one of the best reasons for using a cast iron pan. The pan heats evenly, so whatever you fry in it will fry evenly. This is one of the biggest issues with other kinds of frying pans. They generally retain heat in the center, which then dissipates toward the edges of the pan. 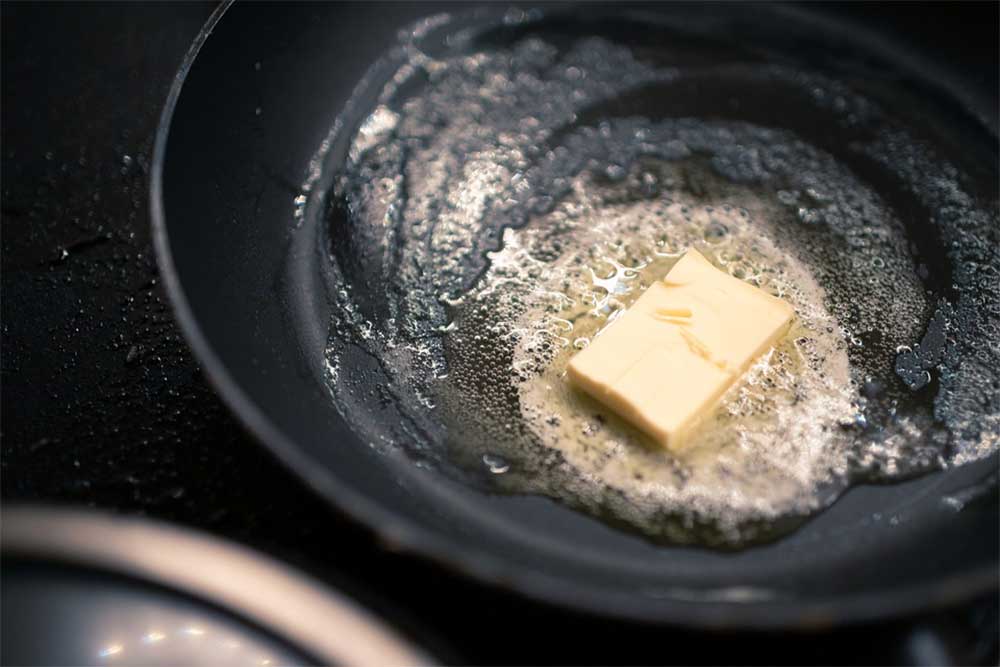 Can you put butter in a cast iron skillet?

You can, but it’s best not to. Cast iron pans need to be seasoned with oil. When you get a new cast iron pan, it’s important to coat the surface with oil and bake it several times. Because of this, it’s best to continue using oil, preferably the same type of oil, whenever you cook with the cast iron pan.

When you have finished cooking with a cast iron pan, you need to wipe it down and then rinse it with hot water. Cast iron pans cannot be scrubbed or washed with soap, as this ruins the seasoning. Due to the dairy content, leaving butter residue on a pan can make it go bad. So it’s best to avoid using butter in a cast iron pan. If you want to cook something in butter, it’s best to use a different pan.

What’s the difference between a cast iron pan and a frying pan?

The main difference is the materials used to make the different pans. Cast iron pans are made entirely from iron and do not have any kind of non-stick coating applied to the surface. This is one of the reasons why seasoning a cast iron pan is so important. Most modern frying pans are primarily made from stainless steel, copper, ceramic, or aluminum. It is very rare for modern everyday frying pans to be made from iron. However, some will contain small amounts of iron, combined with other materials.

The shape of a cast iron pan is also very different from a frying pan. This will depend on the style of pan you choose, but most cast iron pans will be circular with spouts on either side and are also known as skillets. Some cast iron pans have a square shape with ridges along the surface. These are best for cooking meat or other food that doesn’t need to be moved around as it’s cooked.

Why is cast iron better for steak?

This is primarily due to the fact that cast iron pans heat more evenly. They are also much thicker and conduct heat better than most other types of pans. This means that they will heat the steak more evenly and also give you more control over how well the steak will be cooked. Due to the seasoning, there’s also less chance that the steak will stick to the bottom of the pan. The seasoning will also make the steak more flavorful, while at the same time drawing out more flavor from the steak itself.

In a cast iron pan, the steak won’t be scorched and will cook evenly across the surface of the steak, but also through the meat itself. This means that it will be perfectly and evenly cooked in all respects. Which will make it much nicer and easier to eat. It will also be easier to cook, as you won’t have to be concerned about moving it around or checking to see if the steak is cooking properly. You will be able to trust a cast iron pan much more than other types of pans.

Can you fry eggs in cast iron?

The best way to fry eggs is with a cast iron pan. As with other foods, this is primarily because of the way cast iron pans conduct heat evenly across the surface of the pan. This means that your eggs will fry perfectly. With most modern frying pans, the heat is contained within the center of the pan, and then decreases toward the edges. This means that it can be difficult to fry an egg completely evenly.

Due to the seasoning of a cast iron pan, the egg will also be more flavorful. Unlike frying pans, you don’t need to set a cast iron pan to a high temperature in order to fry the egg properly. This does mean that it can take a little longer to heat up and cook. But it will be worth it for a much tastier fried egg.

In a frying pan, you need to move the eggs around to scramble them, but also because the pan does not heat evenly. With a cast iron pan, you of course need to move the eggs around in order to scramble them, but not as much as in a frying pan. There is a knack to making scrambled eggs in a cast iron pan that it’s a good idea to learn. But it will be worth it.

What should you not cook in cast iron?

Some people swear by cast iron pans for every dish and will use them for every meal. But this isn’t always a good idea. It’s a good idea to avoid cooking anything too acidic in a cast iron pan. Acidic food can disrupt the seasoning, but also draw out iron from the pan itself. This isn’t much of an issue but could be if you have a sensitivity to iron.

So, if you alternate between using it for sweet and savory foods, then it will absorb the seasoning and flavoring from both. This can mean that your cake gets a smokey garlicky flavor and your steak gets a chocolatey flavor (which might actually be quite nice). Mixing sweet and savory isn’t always a bad idea, but it’s something to consider.

Delicate and flakey fish is another food to avoid. This might be disappointing as cast iron pans will cook fish perfectly and deliciously. But you don’t have to avoid all types of fish, just the kind that sticks to pans easily.

In fact, it’s best to avoid any food that regularly sticks to the bottom of pans. Despite the large amounts of oil used to season cast iron pans, as well as the additional oil used for cooking, food can still become stuck to the bottom of a cast iron pan. You might want your food to add extra seasoning to your dishes, but you don’t want it to pick up bits of old food.

When food does get stuck to the bottom of your pan, it can be difficult to remove. It’s not a good idea to scrub at a cast iron pan as this will disrupt the seasoning. If you do disrupt the seasoning, especially because you scrubbed it to remove food, there’s a good chance that you will need to re-season it. This isn’t a huge problem because re-seasoning a pan doesn’t take too long. But it can still be an annoying issue that can be avoided.

Cast iron pans are almost indestructible and are incredibly versatile, but they need a surprising amount of gentle care. But this is mostly due to the seasoning that needs to be applied. If you plan on using a cast iron pan for a lot of different dishes, it’s a good idea to invest in a set. This will give you more freedom to try different dishes with lots of different flavors.