Roughly 60% of home cookware currently sold in the US is made of aluminum.

As if catching the flavor of a theory from those who use cast iron pans, many people have expressed concerns over the safety of using aluminum in pans.

On a very basic level, it’s easy to see the reasons behind this. Cast iron can oxidize iron from the pan to the food if a) the pan is not sufficiently seasoned with oil that it forms a barrier between the pan and the food, and b) the food is particularly acidic, as is the case with tomatoes or wine. 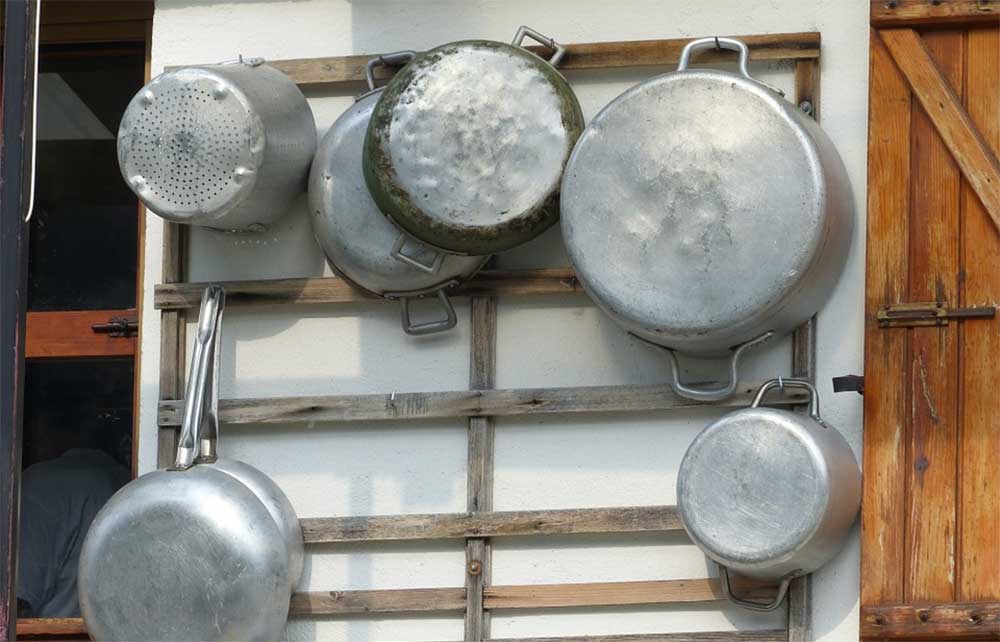 Untreated or uncoated aluminum too reacts with particularly acidic food and likewise leaches metal into the food. So, the similarity bears investigation.

It’s probably worth setting out some definitions before we go much further, because people can get confused.

What do we mean by cast aluminum?

Simply aluminum that has been heated till molten, then poured into a mold to make pans. This is as opposed to early attempts to make aluminum pans by machining them straight out of a block of solid aluminum. These attempts created weak and unsatisfactory pans. So cast iron is the result of a process to deliver hard pans that will stand up to repeated use.

The quick breakdown of this is that cast aluminum is an initial process. Anodization, hard anodization, and non-stick coatings are all subsequent processes that can be applied to either cast or machined aluminum.

Because who wants an easy explanation, eh?

It gets slightly more complex still, because aluminum, left exposed to the air, will begin to anodize naturally. What that means is that it will form a layer of aluminum oxide over the top, which will, with a perfection of perversity, protect the underlying aluminum from the oxygen in the air, and so stop any more aluminum oxide from being formed.

Aluminum oxide is both naturally pretty slippery and pretty hard – both of which things are useful if you’re making cooking pans out of aluminum.

If you buy a cast aluminum pan that says it’s been anodized, it means that an electrochemical process has been introduced, to make the layer of slippery, gemstone-hard aluminum oxide on the top of your aluminum pan thicker than it would normally be, for less chance of food sticking, and less chance of aluminum leaching from your pan to your food, and then into your body.

And non-stick? That’s technically another coating again, because while the thicker your level of aluminum oxide is, the less your food will stick, it won’t give you a true non-stick pan (as, for instance, regular seasoning of cast iron will do), without an additional coating specifically designed to do the job.

That’s what we’re talking about in the world of aluminum cookware.

The likelihood is high that cast aluminum cookware is perfectly safe to use. Again, because various processes are added to aluminum cookware, whether it’s cast or machined, it’s worth saying that if you have an entirely raw cast aluminum pan, not anodized at all by scientists before being sold to you, it will in any case have begun to self-anodize, giving you some protection from aluminum leaching.

The more processes it has had applied to it, the further you get from leaching.

Anodization is pretty much aluminum’s equivalent to cast iron’s seasoning – except where cast iron owners are encouraged to season their pans at home, the electrochemical nature of the anodization process means domestic users are not by any means advised to anodize or hard anodize their pans at home.

But in terms of the process, once your aluminum is anodized, it can’t in any domestic setting be ‘de-anodized’ – you can’t remove the coating of aluminum oxide, because it will have fused to the underlying aluminum.

If you get a non-stick aluminum pan, you can endanger the coating by using harsh metal scrapers or the like, and you might end up with flakes of non-stick coating in your food. That’s off-putting, but it’s not known to be dangerous.

Most cookware in the US is now either anodized or hard anodized at manufacture – which should protect you from most aluminum leaching into your food. That means the risk to your health from most commercially available aluminum pans is very small.

Even if you find plain aluminum pans – and you can if you’re looking extra hard – Dutch ovens and some stovetop slow cookers are available in plain aluminum, there are a few facts worth exploring.

Aluminum is the most common metallic element on our planet. Its compounds are in most things in nature, including plants and animals. So pretty much everything you eat will have aluminum compounds in it.

This is an important difference between aluminum and, for instance, iron. Iron, once absorbed into our bodies, goes nowhere unless, for instance, we lose (or drain) blood. It simply accumulates.

Most aluminum we eat or drink is not absorbed and does not stick around – it passes through our bodies in the natural processes of excretion – so were aluminum to be found to be dangerous to human bodies, it would have to be ingested in significant quantity and intensity to cause damage, and the damage would have to be more or less immediate, because the aluminum would already be on its way out of our bodies.

Another big difference between cast iron and cast aluminum cookware is in the scientific evidence that each component is actually bad for us.

While scientific research has proven high levels of serum iron (iron in the blood) to be a risk factor for several serious conditions, including Alzheimer’s, heart disease, and colorectal cancers, the opposite is true of aluminum.

The idea that aluminum is linked with Alzheimer’s Disease stems from a case decades ago, when an Alzheimer’s patient who had passed was found to have high concentrations of aluminum in his brain.

Immediately, the public conclusion was that aluminum was linked to Alzheimer’s – and that aluminum pans must be a key cause of those high aluminum levels. Since that time, the link between aluminum and Alzheimer’s has been debunked regularly, with the Alzheimer’s Society itself declaring that:

“…there is no convincing evidence that aluminum increases a person’s risk of developing Alzheimer’s disease.”

Added to which, the FDA has also concluded that aluminum does not cause Alzheimer’s disease, and that the use of aluminum products does not carry a health risk to humans.

1.    Does aluminum leach out of modern cast aluminum pans?

It can do, but usually in the 21st-century, the aluminum pans you buy will be either anodized, hard anodized, or non-stick – and each layer of coating on these pans reduces the risk of aluminum leaching into your food, and therefore getting into your body.

If you’re using plain aluminum which has not been electrochemically anodized before being sold to you, it’s still likely to be naturally anodized, and so to carry its own protection from aluminum leaching out into your food.

If you’re extremely concerned about the potential of aluminum leaching, potentially, don’t use your aluminum pans for highly acidic dishes involving tomatoes, citrus fruit, wine, and the like. But really in the modern age, the amount of aluminum that leaches out of aluminum pans is really very small.

2.    If aluminum leaches into our food from our aluminum pans, is it safe to use them?

But assuming you did get some – it probably doesn’t matter. Most aluminum we take in gets flushed from our system naturally through excretion. We also take it in every day through fruits, vegetables, and meat, though usually in a compound form, rather than as a metal.

And all the evidence on which both the Alzheimer’s Society and the FDA rely to claim aluminum is safe for use in the wide range of applications to which we put it (not just in cooking pans) refutes the idea that aluminum poses a danger to human health if ingested.

The National Center for Biotechnology Information agrees that if you’re cooking in plain aluminum pans (which you’re probably not in the 21st century United States), you may have a small increase in the aluminum content of your food. But it also reports that that increase is statistically insignificant in terms of translation into health impacts.

That science is backed up by America’s Test Kitchen, which in 2012 cooked an (acidic) tomato sauce in an aluminum pan for 2 hours, then stored it in the same pan overnight and measured its aluminum content. It reported only 0.0024 mg of aluminum per cup.

Ah yes, the argument runs, but how much is too much when it comes to aluminum?

That’s a valid question, but it’s worth keeping in mind that some over-the-counter antacid tablets contain more than 100 mg of aluminum.

So on balance, with the low likelihood of aluminum leaching in the first place, and the lack of proven harm to health through aluminum ingestion, we’d say yes, cast aluminum is pretty safe, even if you’re using plain, untreated aluminum pans. Which, as we’ve explained, you most likely aren’t.