If you’ve just bought a cast iron skillet, it should say on the label whether it’s been seasoned. Most cast irons will come with some form of pre-seasoning. This prevents rust, but may also be a viable cooking surface. Seasoning at home is still recommended. 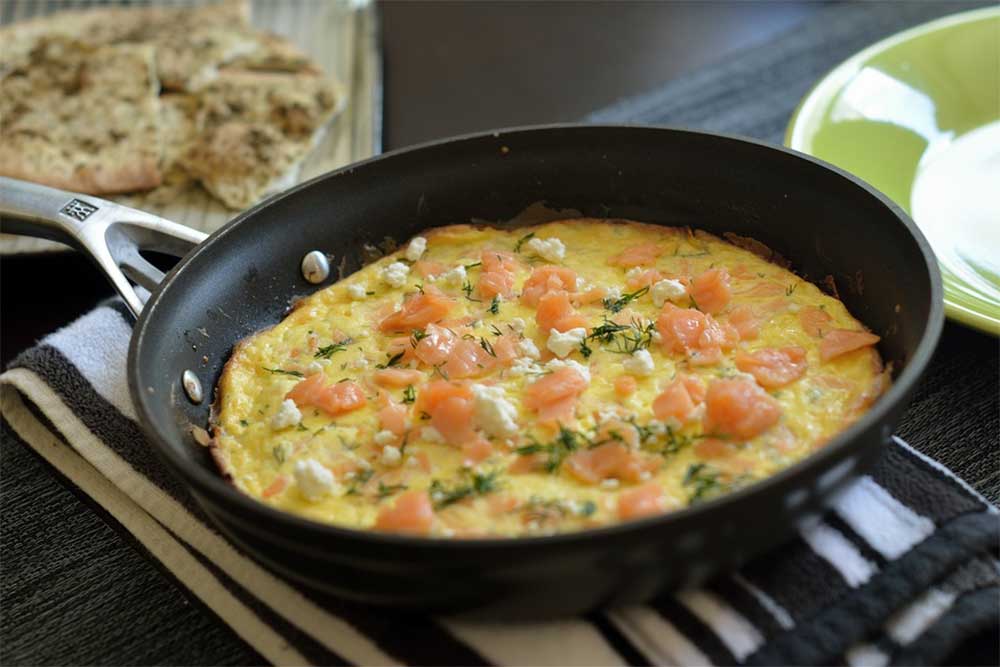 Check to see if your cast iron is seasoned by holding the surface up to the light. The finish should be dark, but with a light sheen that’s semi glossy. The surface should be fairly even, with no dull patches, or areas of rust. However, the surface doesn’t have to be completely smooth, especially for a new pan. As it’s used, the surface will even out. Cook fatty meats and use extra oil to improve the seasoning.

If you’ve seasoned your cast iron yourself, gently press your fingers against the surface. It shouldn’t feel greasy, nor should it stick. If this happens, simply return your cast iron to the oven to bake for longer. Cool the pan, and try touching it again.

A more thorough way to know if your cast iron is seasoned is to use it to cook an egg. Heat a sizable amount of vegetable oil (1 tablespoon or more) for several minutes before adding your egg. Leave the egg to cook completely, at which point it should release from the surface. Exercise patience, and resist moving the egg. Once the egg has finished cooking it should slide off the pan. A small amount of sticking is fine, but there shouldn’t be any major residue.

Over time, the seasoning of the pan will start to degrade and will need to be reapplied. You know when this is happening because food sticks and the surface has started to flake off.

Can you leave oil in a cast iron skillet?

Oil and a cast iron skillet can get confusing, but only because oil is so essential to cast iron cooking. It’s oil that forms the surface of the skillet, otherwise known as the seasoning. But that doesn’t mean you don’t need to be careful when using oil with your cast iron.

Firstly, the best way to cook with a cast iron is to use a lot of oil. This feeds the seasoning and is what makes it so good to cook with. Especially for a new cast iron, cooking extra fatty meats or with large amounts of oil will improve the coating.

If you have a deep cast iron, then you may want to use it for deep-frying. This takes a lot of oil, and many of us look for opportunities to reuse

When there’s been a lot of oil in the skillet, then it’s okay to leave it overnight. However, you don’t want it to sit for too long. The seasoning effect only really takes place when the oil is heated, so left in the skillet overnight all the oil does is sit there. Keep the pan covered, and use it as soon as possible.

Otherwise, when you’ve finished cooking, clean the oil from the skillet immediately. Cast irons are best cleaned when warm, or the food has a chance to stick. Use water and a soft brush to clean the skillet. A cast iron should be dried thoroughly, as water can damage it. Dry the skillet on the stove or in the oven. Once it’s dried, but is still hot, add a thin layer of vegetable oil. This only needs to be a very small amount. Reheat the skillet until the oil reaches smoking point to seal it.

You can leave oil in a cast iron, but only for a short amount of time if you intend to use it. After that, it will begin to turn rancid. Oil left cold in a cast iron skillet won’t help season it, as the heating is necessary for the coating to form.

Can you over season cast iron?

A cast iron can’t be over seasoned, but if it isn’t seasoned correctly then the oil won’t form the right coating. You may mistake this for over seasoning. Otherwise, it may be that the cast iron is under-seasoned and starting to flake. Either way, this is possible to fix. A cast iron can actually last a lifetime if treated correctly.

Seasoning is necessary for a cast iron for the food to release from the pan correctly. To season a cast iron, a layer of oil needs to be applied. The oil is heated to smoking point, so it bonds with the surface to form the seasoning. If this isn’t done properly, the oil won’t stick. This means the surface of your new cast iron is sticky to the touch.

If this has happened to you, it can be fixed. The best option is to put the cast iron into the oven to heat back through. There are a few reasons why this may not have worked the first time - too much oil, not enough heat, not long enough in the oven. Put your oven on as high as it can go, between 450F and 500F, and let it preheat. Turn the cast iron upside down, and put a tray underneath to catch any drips. Leave it in the oven for an hour, before taking it out to cool.

You may need to repeat this process again to fully season the pan.

If you’ve done this more than twice, then it may be better to restart the seasoning process. Scrub the skillet down with hot water and steel wool to remove all the excess oil, dry completely, and reapply an oil with a high smoke point. Wipe off any excess, as the oil should absorb during the initial application. Then, put it back into the oven to bake.

If bits of the pan are flaking off, it isn't over seasoned, but requires re-seasoning. Scrape the pan down, and begin the process again.

Should I season a pre-seasoned cast iron?

A pre-seasoned cast iron skillet should be non-stick, but you should generally still season it yourself. This gives you greater control over what is used in the seasoning. Eventually, any cast iron pan will need to be reseasoned.

Cast irons are often sold pre-seasoned, and you should double-check the packaging to be sure that it is. If the cast iron isn’t then you definitely need to season it. Often, a cast iron will come with a light pre-seasoning that is intended to prevent the pan from rusting. This won’t be enough for non-stick cooking.

In many cases, seasoning a pre-seasoned cast iron is a good idea because it can be completed to your standard. The issue with cast irons seasoned by manufacturers is you can’t be sure of the process used. Especially for cheaper pans, the factory pre-seasoning could be done only as a light layer to prevent rusting in the store.

To season a pre-seasoned cast iron, the process is the same as any regular seasoning. Begin by washing the pan with hot water and mild dish soap, scrubbing evenly with steel wool. This will remove the pre-seasoning. Dry the pan completely on a hot stove. Now, you can apply your own seasoning. Wipe the pan down lightly using an oil with a high smoking point. Bake the pan upside down in the oven for an hour, on a heat of 450F. When the pan has a light sheen but is dry to the touch, it’s seasoned properly.

This seasoning can be sustained by cleaning the pan carefully and reapplying the oil.

Both pre-seasoned and home seasoned pans will eventually need to be reseasoned. As the seasoning wears away, food will begin to stick to the pan and the seasoning may flake off. At this point, the seasoning will need to be stripped back, in the same process as the initial seasoning.

What happens if you don’t season a cast iron?

The surface of an unseasoned cast iron is porous. When heated, the pores grow in size. The oil applied during seasoning is absorbed into these pores, expanding to fill them. As the oil is heated, it bonds to pores and hardens. This forms a smooth and even layer across the surface.

When food is put on this seasoned surface, it’s only touching the durable layer of oil. Without the seasoning, food sticks instead to the pores of the cast iron. The food won’t cook as evenly, and it won’t release from the surface once heated. With a well seasoned cast iron, the surface should only improve with use. As you use oil to cook, this bonds in another thin layer on top of the original seasoning.

Cast iron is also liable to rusting, but seasoning can prevent this. Even a seasoned pan can rust, so it’s important to keep the cast iron dry, and clean it thoroughly. Seasoning will stop water from infusing into the pores of the iron.

Rust doesn’t ruin a cast iron, and even an incredibly rusty skillet can be brought back to life.

A cast iron can be used without seasoning, but it won’t work as well. Instead, food will stick, the skillet will be difficult to clean, and it may start to go rusty.

Other than the initial seasoning, a cast iron will also need to be reseasoned. Seasoning starts to wear off in patches as the skillet is cooked with and cleaned. You may notice this happening because the food sticks in one area and not in the other.

Seasoning is an essential process in cast iron cooking, and shouldn’t be neglected.