Cast iron pans can be used for a wide number of dishes and their primary purpose is to make large portions to be shared by several people. But what if you make too much? Can you just leave it in the pan?

Contents show
1 Can you refrigerate a cast iron skillet?
2 Is it bad to leave food in cast iron?
3 Can you store leftovers in cast iron?
4 Is rust on cast iron dangerous?
4.1 Related Posts:

You can, but it’s best not to. As cast iron pans are seasoned and made from metal, it’s important to keep them dry and not risk allowing anything to stick to them. A cast iron pan is seasoned by repeatedly coating the inside with oil and then cooking it.

If food is left in the pan, especially overnight, then the pan can become wet or damp which can damage the seasoning. Every time you cook with your pan, it takes on more flavor and becomes more seasoned. But if you leave food in it overnight, then it will absorb this flavor too much and the flavor of the seasoning itself can become altered. 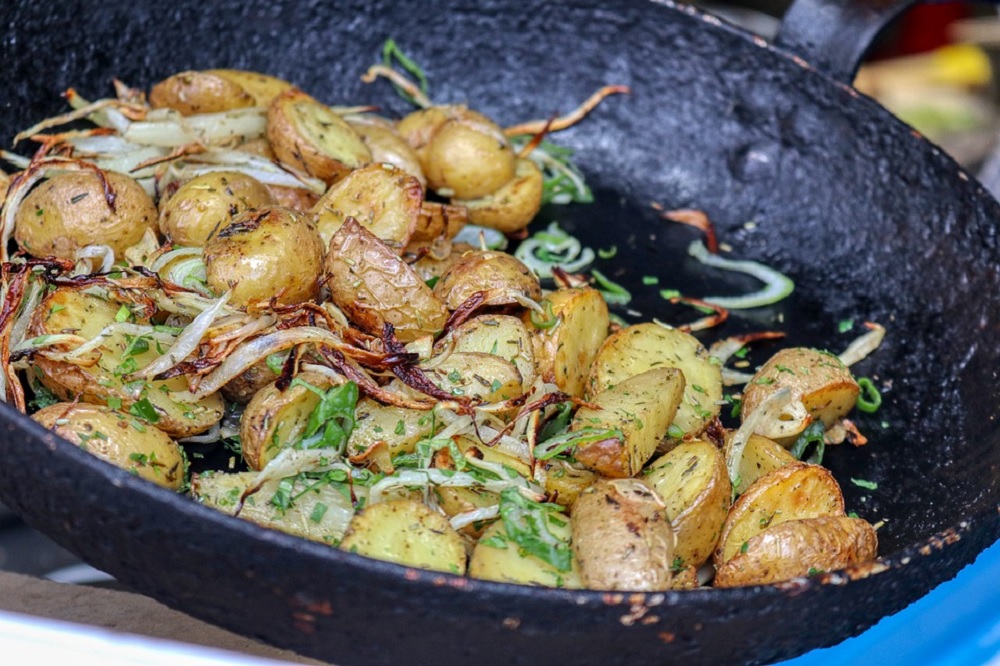 Once you have used the pan, it’s best to remove the food, leave it to cool, and then clean it. It’s also important to dry it straight away. If the pan itself becomes wet, it can rust very easily. Another reason why it’s not a good idea to leave leftovers in a cast iron pan overnight is because of iron leaching.

Iron leaching is when iron from the pain becomes absorbed by the food cooked in it. If a pan is properly seasoned, then only very small amounts of iron will leach out into the food. This won’t be enough to be concerned about (and in some cases might add some much needed iron to your diet). This is because not much iron can leak through the seasoning and you won’t be cooking with the pan long enough for the food to absorb the iron.

But, if you leave leftovers in the pan overnight, there is a longer period of time for the iron to leach out and be absorbed by the food. This won’t be the end of the world and likely won’t be damaging, but it’s worth avoiding just in case.

Can you refrigerate a cast iron skillet?

You can, but it’s best not to. One reason is that cast iron takes a very long time to cool down. One of the main benefits of using cast iron, as it conducts heat so well and heats so evenly. This means that you risk placing a hot pan into a cold refrigerator. This can damage both the pan and the refrigerator, as the pan will be going from one extreme temperature to another.

Another reason is that the pan will also retain the cold for a long time. This means that, should you want to heat the food up again the next day, this will take an incredibly long time, potentially damaging the pan and altering the taste of the food.

Leaving a seasoned cast iron pan in the refrigerator can also damage the seasoning and cause it to become wet. This can potentially cause the pan to rust.

Is it bad to leave food in cast iron?

It’s not the best idea, primarily due to the risk of iron leaching. The amount usually leached into food when cooking with cast iron isn’t usually enough to cause concern, especially if the pan is seasoned. But more leaching will occur the longer you leave the food in the pan. But, again, it isn’t much to be concerned about.

Leaving food in cast iron is generally worse for the dish itself. The seasoning can absorb too much of one flavor. The metal can also begin to rust, even if the food itself isn’t liquid, as water can still leach out.

If you have cast iron that has been coated with enamel or ceramic, then there is a risk of the cast iron pan staining. This is a common issue, especially with juices from meats. There are several different ways to remove the stains, such as using baking soda and vinegar. But these take a while and require a lot of scrubbing and elbow grease, so it’s best to avoid them in the first place.

A lot of the enamel and ceramic on cast iron pans is of a pale color, usually white or cream, which stains easily. So it’s important to clean it as soon as you can. That said, even these types of cast iron pans should be allowed to cool before they are washed. Even if they go from a hot stovetop or oven to hot water, there is a risk of them cracking.

Cast iron is expensive and should last a very long time, so it’s important not to damage it with something so avoidable. Cast iron needs to be cool before it is cleaned, but it also needs to be cleaned as soon as it is cooled.

Can you store leftovers in cast iron?

Not really. It’s best to use your cast iron for cooking only. Treat it as you would any other cooking utensil and transfer any leftovers into an airtight container. This is better for the cast iron dish itself but also for the food. Cast iron pans do not have lids, so the food cannot be covered properly. You might be able to cover it with some plastic wrap or foil but this is excessive and wasteful.

A cast iron dish will also be heavy and take up a lot of space, especially with the handle. Cast iron is not designed for storing food and it will be impractical to use a cast iron dish to store leftovers. This is especially true if you have a shallow cast iron skillet. It will be very difficult to cover the food properly, so it will not keep well and likely go bad.

It is incredibly important to properly cover leftovers. Food can go bad quickly and easily, all it needs is a little oxygen. Leftovers should be stored in an airtight container and eaten within a day or so. Otherwise, the food will not taste as nice and might even make you ill. So it’s best to store them in an airtight container or you might as well not store them at all.

Another reason not to use cast iron to store leftovers is the impracticality of not being able to use the pan again until the leftovers are eaten. You might not want to cook anything else in the cast iron pan until you have used up the leftovers. But this is a bit risky and unnecessarily impractical.

The main reason to store leftovers in a cast iron pan is to avoid the hassle of doing more dishes. But placing a cast iron dish in the refrigerator, risking stains, and potentially ruining the seasoning is not worth it to avoid washing an extra Tupperware box (no matter how irritating they are to clean and dry). So, overall, the answer is “best not”. Transferring the food into an airtight container is much more practical.

Is rust on cast iron dangerous?

One of the risks of leaving food in a cast iron pan is that it can cause rust to develop. This will generally be over time as it is unlikely that rust will develop quickly. This means that it is difficult to spot. In this case, prevention is better than reaction. It’s important to clean a cast iron dish as soon as you can and ensure it is completely dry before putting it away.

The rust on cast iron isn’t necessarily dangerous. There is a chance that the rust will transfer from the pan to the food being cooked in it, but this will only be a very small amount. Unless you have an allergy to rust or an illness that would make consuming rust especially unhealthy, then you shouldn’t be too worried.

So, if you notice that your pan is rusty and you have been eating from it, you shouldn’t be worried. That said, once you have noticed the rust, you should remove it straight away. This is because you, of course, don’t want to be consuming any more rust. But also because rust is very damaging and can cause permanent damage to your cast iron.

Rust can be removed with standard cleaning products or baking soda and vinegar if it is especially stubborn. Try to remove the rust with scrubbing, rather than soaking the dish as this can make the problem worse. You will very likely have to remove the seasoning and redo it. This can be a hassle, but there is a chance that the rust is further along the pan than you can see, so it’s worth cleaning the whole thing just in case.