If you already own a cast iron skillet, then you will already be aware that the list of dishes that you can cook in it is seemingly endless. Cast iron skillets aren’t cheap, but they really are incredible. And they have the ability to completely transform a dish from one thing to another.

One of these dishes is probably pizza. When you think about cooking pizza dough, your mind probably jumps to stoves and pizza ovens. But, in fact, you can cook pizza dough in a cast iron skillet. Let’s take a look at how. 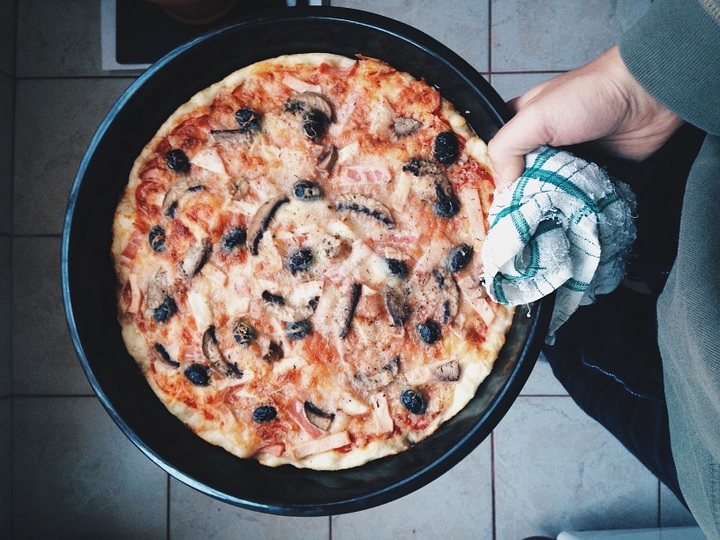 Can you cook Pizza Dough in a Cast Iron Skillet?

This is mainly because, as you know, cast iron skillets are full of seasoning that occurs through years of use. This seasoning then infuses with whatever you are cooking in the skillet and transforms the flavor as it is suddenly packed with flavors that you wouldn’t have if you used a different style of pan.

But, this isn’t the only reason that a cast iron skillet is ideal for cooking pizza dough. It is also a great choice as the skillet almost replicates the same style of cooking as a pizza stone that you place in the oven. So, this means that you can get a yummy traditional style pizza without even needing to use a pizza stone (which is something that not many people have).

However, this is just touching the surface on why cooking pizza dough with a cast iron skillet is so great. So let’s take a look at some other reasons.

Is a Cast Iron Skillet good for Cooking Pizza Dough?

As we have already established, yes! A cast iron skillet is excellent for cooking pizza dough. We’ve already covered that it is great for infusing seasonings from the skillet, and that it can create a traditional pizza texture. But why else is it so great?

Well, one of the best things about cooking pizza dough in a cast iron skillet is that you can get a real crispy crust by using this style of cooking. In order to achieve this level of crispiness, you need to be able to get whatever you are cooking the dough into a very high heat. This is easily achievable with a cast iron skillet.

Cast iron skillets are incredibly good at maintaining high temperatures due to the material that they are built with. This means that for as long as the skillet is on the heat, the temperature of the skillet will remain the same. So, by using a cast iron skillet to cook your pizza dough, you not only get an incredibly flavorful pizza, but you also get that classic crunch that takes the taste to a whole new level.

So, how do you cook pizza dough in a cast iron skillet? Let’s take a look.

How to Cook Pizza Dough using your Cast Iron Skillet

If you want to cook pizza dough in your cast iron skillet, you first need to begin by preparing your door. You don’t need to do anything special for this, simply follow the same recipe that you usually follow. Once it is ready, then you can begin cooking it.

The first thing that you need to do is get your cast iron skillet, it should measure at least 12 inches in size, and place it in the oven. This can seem like a strange step, but it is the best way to heat up your skillet ready to use. So, set the oven to 500 degrees Fahrenheit, and place your empty skillet in it for 20 minutes.

While you have the skillet preheating in the oven, you can then begin rolling the dough that you prepared earlier. You should begin rolling it out using your hands, until the dough has formed either an 8×8 or 10×10 inch circle.

After your dough is ready, you then need to move onto your cast iron skillet. So, very carefully, you should open up your oven, and remove the skillet. Remember that it is going to be very hot, so wear oven gloves, and have an oven pad ready to place the skillet on.

Ensuring that you are careful at every stage, you then need to grab a paper towel and begin to coat the inside of your skillet with oil. We really can’t stress enough how important it is that you use caution at every moment because your skillet will be boiling.

Once your skillet has been coated with oil, you then need to move your pizza dough into it. You have two options when you do this. You can either use hands, or you can partially roll the dough onto a rolling pin to aid the process. The method that you use for this is entirely your choice, so do whatever you feel most comfortable with.

After the dough has been dropped into the skillet, press down slightly to ensure it still holds its round shape. Remember that you don’t need to worry about the crust as this will form of its own accord. Then, all you need to do is add your tomato sauce base, cheese, and any toppings that you want. Bake the pizza for 14-16 minutes, and then it will be ready to eat.

So, yes, you absolutely can cook pizza dough in a skillet. In fact, it is the closest that you will get to cooking a pizza on a pizza stone. So if you want a traditional style pizza then cooking it in a cast iron skillet is a great choice.