Absolutely you can! Cobbler is an incredibly traditional and super simple American pastime, but did you know that chefs have been making it in a cast-iron skillet for decades, if not centuries? It’s a tried and true method actually!

In fact, it’s one of the easiest and tastiest desserts you can make, using only a couple of ingredients and creating very few dishes - the only others you’ll need are one for the filling and one for the topping. Two bowls, a skillet and a spoon!

As well as the lack of dishes, there is also minimal clean-up once you’re finished, and if there’s only a couple of you sharing, you can eat it right out of the pan if you want. Now that’s efficiency - and it also makes a great Insta snap. 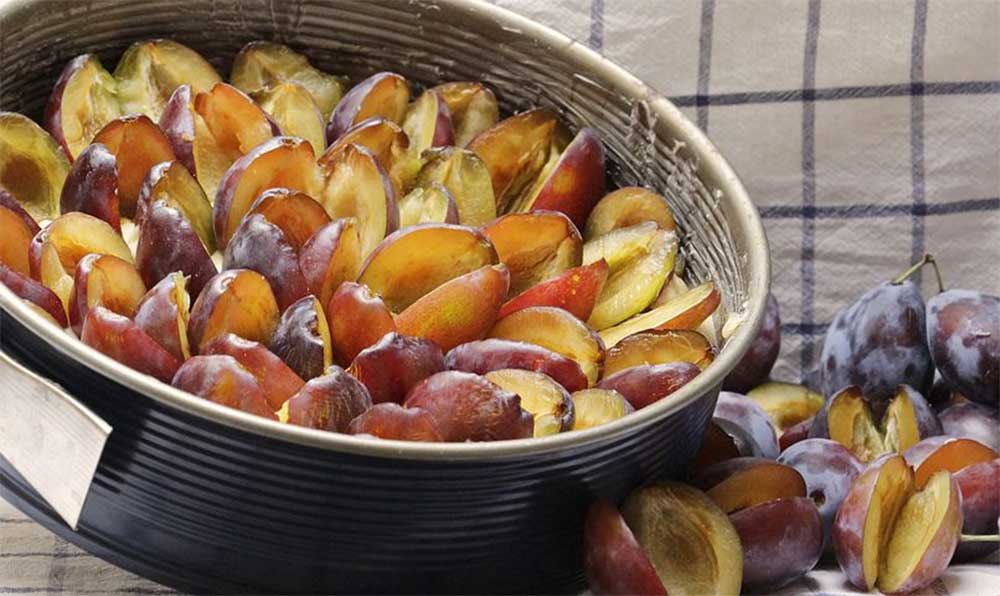 Whether you want to create an apple pie vibe with some crisp and crunchy Granny Smiths or are more of a summer berry kind of person, a cast-iron skillet is a perfect place to prepare your cobbler - it works just as well as any other dish or pie tray.

This dish is made in exactly the same way as you would prepare a regular cobbler. It is also, conveniently, a very easy dessert to make vegetarian, vegan, or gluten-free, so great for serving dinner to a variety of different guests.

Well, cobbler is a versatile recipe indeed, so your base is super easy - you can use whatever fruit you’ve got around, as long as you’ll enjoy the taste of it baked in a pie. Nectarines, blackberries, strawberries, apples, pears, peaches, plums, blueberries…

Your choices are plentiful, so first things first, prepare your filling. Peel the skin off of  anything that requires peeling then slice into small, bite-sized chunks. There’s no need to be neat about it, everything’s getting baked anyways!

Once that’s done, you’ll combine all of your fruits in a big old bowl, as well as adding a cup of whichever sugar you prefer - brown is lovely, but regular old white sugar works just as well if you’d rather stick to traditional recipes.

You may also want to add a couple of teaspoons of cornstarch to thicken the filling up nicely, as well as some cinnamon or other seasonings and spices to taste, but it really depends on what fruit you are using and your preferences.

Be sure that your cast iron is well greased beforehand, as you don’t want any of the filling to stick to the bottom and burn, and if you’re serving individual pieces with ice cream then it will be a lot easier to remove afterward.

Before you get to work heating up your fruit, it’s time to make the cobbler topping. This is usually done very easily, as you’ll likely have most of the ingredients in the pantry already: sugar, salt, flour, baking powder, and a little milk.

Melt a little butter and add it to your floury sugary mix, combining with your fingers or a wooden spoon to eventually form a messy, crumbly dough. Again, the beauty of a cobbler is that it’s not made to look pretty, so don’t worry about being neat.

Now your topping is good to go, transfer your fruit to the pre-greased cast-iron skillet and then place it on your stovetop on a low to medium heat. Give it around ten minutes, or until everything is bubbly and piping hot right to the center.

Should you be worried there is too much liquid, you can get away with spooning some out and tipping away - this is generally a result of using especially ripe and juicy fruits, and not a mistake that you’ve made in the cooking process.

Once the fruity, sugary liquid is looking nice and thick, it’s time to take it off the heat and top it with your dough. Use your hands to shape thin, flat disks of dough and position them on top of the filling, rather than trying to create one unified “pie lid” that goes over the top.

This is a cobbler, people. It doesn’t have to appear gourmet standard, so don’t spend too much time arranging them - it’s getting baked anyways. You can overlap the disks if you want more of a cohesive “topping” though.

Fill up any gaps with additional dough, though don’t worry too much about making things stunning. Some filling will almost definitely leak through during the baking process, so there’s no point in aiming for perfection here.

As soon as you’re happy with it, pop the entire skillet into a hot and waiting oven, allowing the whole cobbler to bake as a unit for between 30 minutes and an hour, depending on the size and how crispy you’d like it.

Make sure to check on it after about 20 minutes, to ensure the cobbler isn’t getting dark prematurely. If you’re worried, cover with a sheet of aluminum foil or something else oven-safe to prevent a burnt top from ruining things.

Peek through the oven door - if the top appears golden brown with fruit juice bubbling through, then you’re probably good to go. It’s all about preference though, so leave it in a little longer if you prefer a crunchier top.

Now, because it’s cooked right there in the skillet, you should give the cobbler at least fifteen minutes to cool down before you start digging in. As we mentioned above already, you could just eat it directly from the pan if you wanted!

There are many ways to serve a cobbler up, but traditionally, you’ll want to accompany it with a big old scoop of vanilla ice cream. This cuts through the sharp fruit and pairs beautifully with the baked topping for a dessert everybody loves.

Be careful when you’re serving it up, if you’re giving individual portions. It will probably get mushy and start falling apart once you’ve begun cutting it, so you’re never going to get a truly precise square, unfortunately.