Cooking juicy burgers shouldn’t just be restricted to cooking on fine sunny days in your yard on the grill and many people even say that cooking your burgers on a cast iron skillet will improve and retain the natural meaty flavors - yum!

Cooking your burgers on a cast iron skillet will save you a lot of time cleaning up afterward as you won’t have to remove any drip trays or clean down one huge piece of equipment.

Regardless of if you’re making your own meat patties or just buying them straight from the butchers in the store, they’ll taste double as amazing as they would if they were grilled. 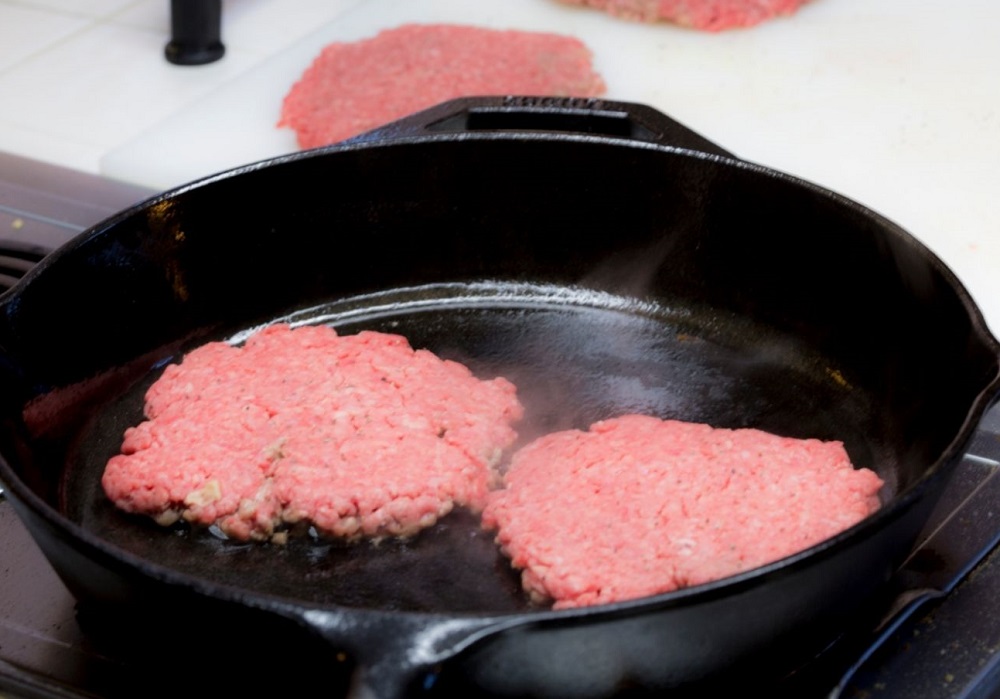 How To Cook Burgers In A Cast Iron Skillet

If you like to put crispy bacon on your burgers, then you’ll want to begin by cooking these in your cast iron skillet first. Cook the bacon on low to medium heat until grease starts to come out of the bacon, then once you can see the fat starting to shrivel and the bacon turning a darker color, turn the temperature up to high and begin crisping the bacon to your desired texture.

Once you’re happy with how crispy they are, place the bacon bits on a paper towel to drain the excess grease. You’ll be able to quickly reheat the bacon pieces after cooking the burgers so that they’ll be warm when they eat them.

Make sure to leave the excess grease or oils from the bacon in the cast iron skillet when you begin cooking your burgers. If you feel there is not enough oil left from the bacon on the surface of the skillet then you can choose to add oil at your discretion.

Wait a few minutes for your cast iron to skillet up on the stove and once you can see the oil sizzling slightly on the top, add your burgers and make sure they’re not touching each other otherwise they’ll stick together.

Try to flatten your burgers as much as possible so they cook more quickly and retain as much moisture and flavor as possible.

Cook your burgers on a medium-high for 5 minutes and then flip over and cook for a further 1-2 minutes, depending on what kind of burger meat you’re using and how well done you like them to be. The edges of the burger should start to form a darker crust and when you know it should be about ready to flip.

When flipping the burger over, try to make sure that as much of the burger is on the spatula as possible so it flips as one entire thing, otherwise, if you only pick up half the burger the half might drop off.

If you try to flip the meat before it’s ready then it may fall apart as you’re moving it. Don’t move the burgers around in the cast iron skillet, just trust the cooking process and you won’t be disappointed by your results.

Only press down on your burger with a spatula in the skillet after you’ve flipped it so the shape stays and it cooks evenly. If you press too hard then the juices will escape and you may lose some of the flavors from the burger.

Don’t add any cheese to your burger until you’ve flipped it over and if you want it to melt nicely on the surface of the burger you can try placing a cooking cloche to help speed up the process. Don’t try flipping the burger over with the cheese as it will only end up sticking to the surface of the cast iron skillet and could burn.

If you’ve got any spare room in your cast iron skillet, you can also toast or warm up your burger buns slightly before adding all your ingredients into the middle. You’ll also want to quickly warm up the bacon you cooked beforehand as well so everything is around the same temperature.

Add some lettuce, tomato, pickles, or burger sauces of your choice to the burger and let the juicy meat do all the talking.

One of the downsides of cooking your burgers in a cast iron skillet is that you will only be able to cook around two patties at once, whereas you’d be able to do more than 5 at one time on an outside grill. However, this slight inconvenience is more than worth it when you finally taste that succulent meat.

Tips For Cooking Burgers In A Cast Iron Skillet

Some of the best tips we can offer when cooking homemade patties on a cast iron skillet is not to compress the meat too much as it’ll make the burgers tougher and almost tasteless.

You always don’t need to use fresh meat for this process, you can make up your mixture in advance and then freeze the patties as you wish. You can cook the patties from frozen, but it will take around 15 minutes in a skillet and they may not retain some of the natural juices as cooking them fresh would.

Some good ingredients to make some tasty burgers of your own at home are ground beef (fat percentage of your choice), kosher salt, black pepper, grill seasoning, and add Worcestershire sauce for a bit of zing to your burger.