Yes, you can certainly cook bacon in a cast iron skillet whether that will be on your stove, under the grill, or in the oven.

Cast iron skillets are great for cooking bacon as it conducts heat evenly so the bacon will cook through at the same with no burnt patches no matter how thick or thin the bacon is.

It’s also ideal if you’re cooking lots of bacon for the entire family or a group of friends as cast iron skillets retain heat very well so you can keep bacon warm even when it’s been removed off the heat so people can come back and help themselves to more bacon if they want to without having to keep it on a burning stove. 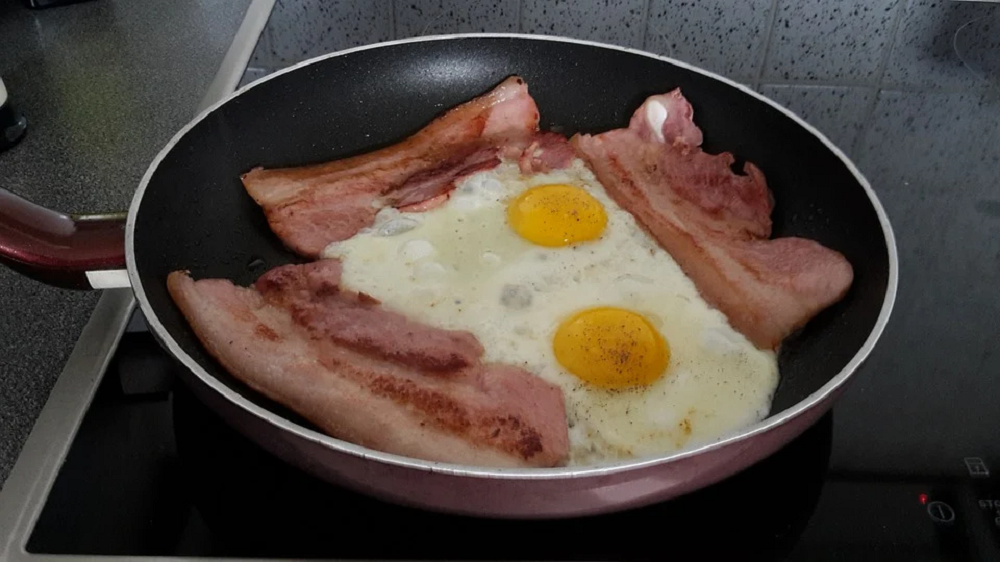 Cast iron is also a natural non-stick surface so you won’t have to worry about trying to use heavy-duty tongs to help flip over your bacon to cook on the other side. As long as you season your cast iron skillet properly beforehand, you’ll only have to do a light flip of your bacon pieces, preventing you from spending too much time near the sizzling and spitting bacon fat on the heat.

As the cast iron surface is non-stick you won’t have to worry about using aluminum cooking foil to place your bacon on whilst you cook so it won’t get stuck, therefore you’ll be cutting down on wastage disposal afterward but you won’t have to go through your supply of foil either.

If you want fuss-free cooking then cooking your bacon in a cast iron skillet in the oven will be the best choice. You’ll still be able to yield the same crispy bacon pieces but without the need for constantly flipping your bacon and being splattered by the hot grease.

How do you cook bacon in a cast iron skillet?

You can cook bacon on the stove or in the oven in a cast iron skillet and we’ll be showing you how to do both.

Many people would recommend you preheat your cast iron skillet before putting the bacon in, but this is completely up to you and you might find it quicker and easier to add the bacon then turn on the heat. If you are going to preheat the skillet on the stove or in the oven, then only do so on low to medium heat for 5 minutes before adding the bacon in.

However, we’d recommend adding your bacon to a cold iron skillet as you’ll want to make sure that your bacon pieces aren’t touching and it’ll be harder to move them around the skillet if it’s hot.

Cooking bacon on the stove may increase the risk of you burning yourself with the hot grease, so make sure you don’t turn the temperature up too high and try cooking your bacon slowly but for a longer time.

You will not need to add any form of grease or oil to the cast iron skillet as it naturally has a non-stick surface and the bacon also releases fat that allows it to slip around the pan by itself.

How to cook bacon in a cast iron skillet on the stove:

How to cook bacon in a cast iron skillet in the oven:

The key to creating perfect bacon in a cast iron skillet is by letting the pan and the bacon heat up together so the bacon doesn’t cook too quickly and burn.

It may seem strange to recommend the bacon not to touch within the skillet whilst cooking, but overcrowding or overlapping bacon can prevent it from becoming crispy or you’ll have to cook it for way longer to achieve the crispness levels you desire.

Cooking your bacon at lower temperatures in the skillet will allow the bacon to release some of the natural grease and fats which makes it easier to crisp up the bacon when you eventually turn the cooking temperatures up. You’ll be frying and crispy your bacon in its own fats so it’ll be extra tasty without being too oily from using additional cooking oils.

If you’re cooking a fry up, then the residue left in a pan after cooking bacon is also the perfect surface for cooking other breakfast food items like mushrooms or eggs as they’ll have the natural salty fats from the bacon still there which will also help to move those foods around the skillet when cooking so they don’t stick.

How do you keep bacon from sticking to cast iron?

A properly seasoned cast iron skillet will prevent the bacon from sticking to the surface when cooking, if you haven’t seasoned it properly or maybe it’s been a while since you have then you may experience some sticking from bacon or from other foods you cook.

You may find that cheaper bacon has sugars added to it to help with the taste, but these sugars burn easily and will make the bacon stick to the surface. If this is the case then you should try cooking your bacon at lower temperatures for the duration of the cooking process or try baking the bacon in the skillet in the oven instead.

When you begin cooking your bacon, you’ll begin to see some grease forming around the skillet which is being excreted by the bacon. This grease will prevent the bacon from sticking to the surface (if you cook at the right temperature) and will also help season your skillet for future uses.

If you think your cast iron skillet needs something extra to help prevent the food from sticking then you can add a tiny bit of cooking oil before you start cooking.

If you’re beginning to notice that your cast iron skillet is losing its non-stick surface then you can take precautions to regain this surface by seasoning it yourself.

To start the process, wash your cast iron skillet in hot soapy water, try not to be too rough, or don’t use an abrasive scrubbing sponge as it’ll damage the surface. Let the skillet dry naturally or using a microfiber cloth dry it thoroughly before moving on to the next step. Spread a thin layer of vegetable oil ( you can collect any leftover grease from when you’ve cooked bacon) across the surface of the skillet.

Preheat the oven to 375 degrees Fahrenheit and when it’s heated up, place a foil on the bottom layer of your oven and then place your skillet upside down on the middle shelf of the oven. Leave everything to bake for 1 hour and then let the skillet cool down before removing it from the oven again.

You may want to repeat this process 2 or 3 times, making sure to buff the oil each time to create a good layer of seasoning for your skillet so no food will stick to it when you come to cook again. If you cook frequently you may want to season your skillet a few times a year.