If you have ever been to the grocery store and suddenly craved some cake, then chances are you know just how expensive a pre-made cake can be. But how can you avoid spending your hard-earned money on a cake, while still fulfilling your craving for something sweet and decadent? Well, the answer to that is simple, you have to make the cake yourself.

Now before you cringe away from your computer screen, we are not suggesting you make a cake from scratch. Although if that is something you are interested in doing, then you should totally give it a try. However, at this moment, we are instead discussing the idea of purchasing a box of cake mix to help make your dreams of dessert come true. 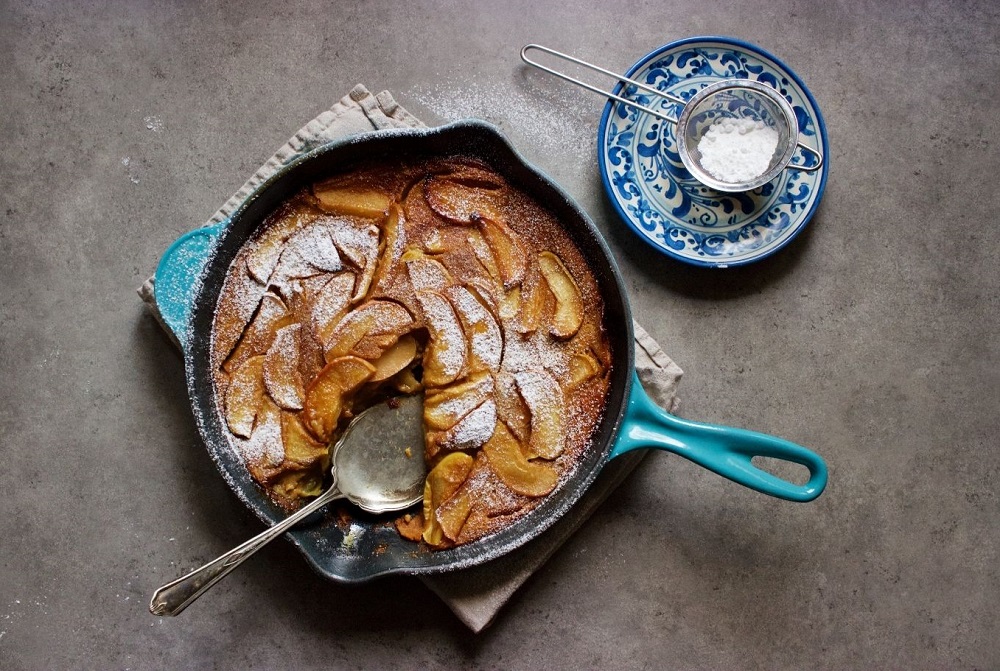 Once upon a time, cake mix was seen as the natural enemy of the baking enthusiast, with many considering it to be a lazy and tasteless hack.

However, in recent years it has become more widely accepted, with many bakers now considering cake mix as the starting point to make something great. And if there is one surefire way to jazz up a box cake, it’s by cooking it in a cast-iron pan.

The Benefits Of A Cast Iron Pan

Cast iron pans are pretty notorious for their long life span, durable design and non-stick properties. But did you know that they are also incredibly versatile cooking utensils? Not only can they be used on both the hob and in the oven.

But they can also be used to cook and prepare a wide variety of different foods. From savoury dishes like burgers to sweet dishes like cobblers and pies. Cast iron pans can do it all! But they are especially good at making delicious and fluffy cakes.

We know that the notion of baking a cake in a cast iron pan may sound a little bit strange, but it is a timely method that has been used for centuries. Some baking enthusiasts may even argue that using a cast iron pan is the only way to assure that your cake is baked evenly and finished with a soft centre and crispy bottom. But why are cast iron pans so good for baking?

Well, the primary answer to this question is that cast iron pans are just very good at retaining their heat during the baking process. Once a cast iron pan has been introduced to a preheated oven, it will disperse the heat equally and maintain it until the job is done. This allows the cake, or other baked goods, to cook evenly resulting in a cake that is soft to the touch and almost perfect in its quality.

This is also the main reason why cooking a box cake in a cast-iron pan can help elevate the finished product to a more decadent and delicious level.

Can You Cook A Box Cake In A Cast Iron Pan?

By now you have probably deduced the answer to this question yourself. Yes, you can cook a box cake in a cast iron pan. In fact, by doing so you can assure that the cake mix is evenly cooked and of an experienced quality.

Beyond that, cooking a box cake in a cast iron pan can provide you with the freedom to experiment with various cake box recipes that work to heighten the cake mix to a more gourmet level.

Down below we have included a simple recipe for skillet pineapple upside-down cake. This recipe is very easy to make and requires a box cake as the main basis of the cake’s structure. So why not check it out and see how easily you can make a cake that both tastes and looks good.

By following this recipe, you will see how easy and effective it can be to bake a box cake in a cast iron pan. The recipe also elevates the mix to a more professional standard, which will result in a cake that is delicious for you and your loved ones.

How To Remove Your Cake From A Cast Iron Pan

Whenever baking a cake, or some other type of baked goods, there’s always the concern of not being able to remove the finished product from its tin or bowl. However, with cast iron pans the risk is greatly reduced. This is because the risk of the cake sticking to the inside of the pan depends entirely on how well seasoned the pan is.

When owning a cast iron pan, it is important to make sure that you season it before you begin using the pan for cooking or baking. Seasoning is a process which involves layers of cooking oil to the interior and exterior of your cast iron pan, before applying the pan to high heat. By doing this, you are able to polymerize the oil and create a thin protective layer that keeps the pan safe from rust and erosion.

Because of the seasoning, food will also not stick to the inside of the pan. However, if you are still apprehensive about not greasing the pan during the baking process, then you can add a little for peace of mind.