Olive oil should not be used to season a cast iron skillet. While it may form the initial coating, the seasoning will quickly start to degrade as you cook. Other oils with a higher smoke point are a much better choice. However, once your cast iron has been well seasoned, you can cook with olive oil. 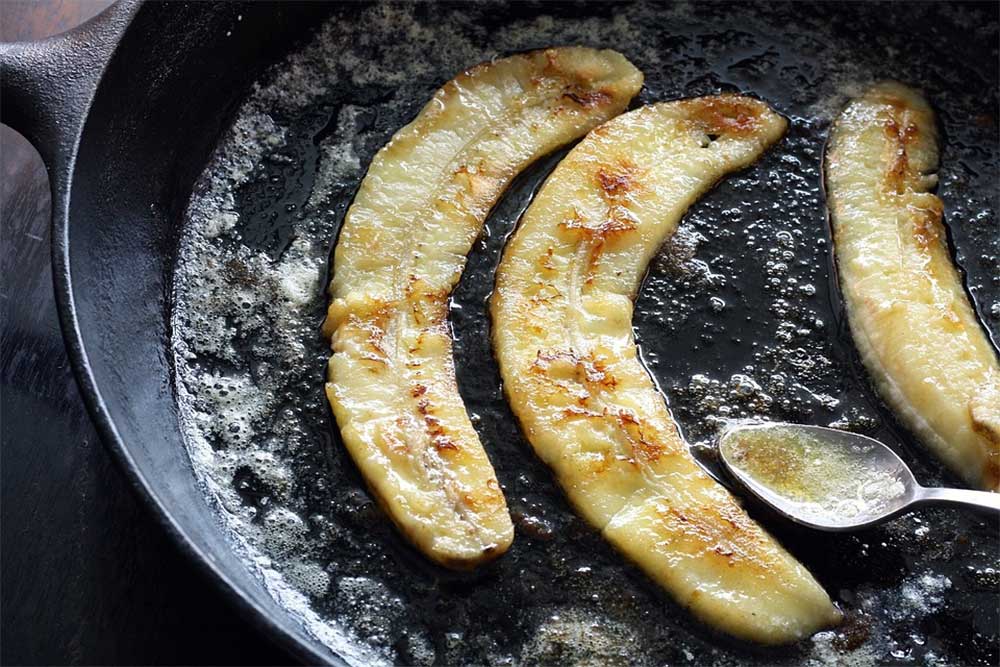 The oil is heated until it reaches the smoke point and releases fatty acids, which bond and stick to the cast iron. For this to happen best, the pan needs to be heated at a high temperature for a significant length of time.

While olive oil can reach high temperatures before it starts smoking, it still has a lower smoke point than other oils. This means that during the baking process it doesn’t form the same durable coating.

Initially, it may seem as though the olive oil has created a good seasoning. The surface of the cast iron will be black and glossy, and dry to the touch. However, as you start to cook the problems will occur. Due to the lower smoke point, olive oil can burn when heated.

This leaves behind a sticky residue. As you cook with your cast iron, even if you’ve used other oils along the way, the important seasoning layer will overheat and burn. It can form gunk on the pan, or it may wear away entirely.

Once the cast iron has been seasoned with another oil, one with a higher smoking point, it’s perfectly fine to cook with olive oil. However, maintain the surface of the seasoning with other types of high-smoking oils.

Olive oil can be used for an initial season, but it’s difficult to maintain and can degrade quicker. Many choose to use it because it’s so widely available, but it’s worth looking for a more appropriate oil to prolong the life of the pan.

Can I season a cast iron with coconut oil?

Coconut oil can be used for seasoning a cast iron, but it isn’t the best choice. Coconut oil is growing in popularity worldwide and many are using it in cookery due to the health properties.

When seasoning a pan, you need to use an oil with a high smoke point to ensure the most durable coating. Coconut oil does have a fairly high smoke point, but it isn’t as high as oils traditionally used for seasoning. Because of this, the coconut oil seasoning may begin to wear down quicker.

If you’re choosing to use coconut oil, it may be because you’re thinking of the health benefits. Coconut oil is considered a healthier choice by many, due to the composition of the fats. Unfortunately, oil is a large part of cast iron cookery. Even if you use coconut oil to season, oil will still need to be applied regularly to maintain the seasoning.

The seasoning process is simple, and requires scrubbing down the cast iron with hot water, mild soap, and steel wool. The pan then needs to be wiped dry with a clean cloth, and heated on the stove to remove the last of the water. Then, the coconut oil is applied in a thin layer. You may need to heat the coconut oil if it’s solidified. Be careful, as you don’t want to apply too much. A thin coating should be absorbed by the cast irons pores, and any excess wiped away.

When the cast iron is removed, the coconut oil should have formed a dark surface with a slight shine. The surface shouldn’t be greasy or sticky. You may need to repeat this process to create a strong seasoning.

Can bacon grease be used to season a cast iron?

Bacon grease can be used to season a cast iron, but it may not be the perfect choice due to the lower smoke point. A cast iron seasoned with bacon grease may need more regular upkeep than one seasoned with oils.

The initial issue with using bacon grease is that you need to collect your grease. That means cooking bacon in another pan, draining off the grease, and saving it. It’s harder to control the amount of grease you have to use. Bacon grease does have a relatively long shelf life, and can be kept in the refrigerator for over 6 months. If you plan on buying a cast iron, start cooking bacon, so you have a reserve in store.

Using bacon grease may also give your cast iron a slight taste, and this is a pro or a con depending on your view. If you generally use your cast iron for meals such as steak and burgers, then the bacon grease can only improve the taste. For other types of cooking, you may prefer a neutral oil.

If you choose to do your initial seasoning with another oil, bacon grease still has its place. Seasoning builds up over time as you cook with fats and oils. For a new cast iron, recently seasoned, cooking fatty bacon can improve the surface. The initial few meals you make should be high in fats and greases, and cooked with larger amounts of oil. Bacon is perfect for this, and all the natural fats released will fuse to the surface for further seasoning.

Of course, if you’ve been saving your bacon grease you may not relish the thought of more bacon meals. Any fatty meats will work, as they release the same grease to bond with the cast iron.

Another fat that isn’t ideal for initial seasoning, but great for cooking, is butter. Butter has a lower smoke point, so that initial fuse won’t be as strong. That makes it inopportune for seasoning. However, cooking with butter on a cast iron is good for the health of the pan.

What is the best oil for seasoning a cast iron?

The best oils for seasoning a cast iron are those with a high smoke point. Grapeseed oil is the most popular choice, but some prefer the unique properties of flaxseed oil. Vegetable oil, avocado oil, and peanut oil are also common, but come with pros and cons.

Grapeseed oil is a solid choice, and is greatly recommended for seasoning a cast iron. The advantages of grapeseed oil are numerous. First, it has a smoke point high enough to create a durable bonded surface, but not too high for handling. Grapeseed oil also has a lower saturated fat content, making it a healthier option than some other oils.

The almost neutral taste and smell means grapeseed oil can be used for a variety of dishes without affecting the taste. It’s also relatively cheap and easy to purchase, making it an accessible choice.

Flaxseed oil has been growing in popularity, but it’s surprisingly controversial. The oil has a low smoke point, but it’s naturally drying. One reason for seasoning is that cast iron is liable to rust. A naturally drying oil will help eliminate dangerous moisture. Many of these oils aren’t food safe, but flaxseed oil is.

However, because of the low smoke point it’s recommended that when using flaxseed oil the seasoning process should be applied several times initially. Done correctly, flaxseed oil is slick and durable. Although this is appealing, there are numerous downsides to flaxseed. The smell is strong, and many find it unpleasant. It can be expensive and hard to find. Finally, some users have reported it flaking off too quickly. Overall, flaxseed isn’t worth it compared to easier oils.

Vegetable oil is common, but some report it leaves a sticky residue. Avocado oil forms a solid bond but needs an incredibly high heat. Peanut oil is good, although it can’t be used for people with nut allergies.

For all the pros and cons, any oil, grease, or fat can be used to season a cast iron. Cast irons are durable, even if they do need some extra care. Don’t panic over the details, just get seasoning and start cooking. Eventually you’ll find what works for you, and take your cooking to the next level.