Cast iron skillets can be a beginner’s nightmare in a kitchen. They’re heavy, seem constantly temperamental, either too hot or too cold, and they’re almost impossible to clean properly. But chefs and experts swear by them, so they must be a kitchen essential, right?

It’s all about learning how to use cast iron skillets. They’re not like a regular frying pan, after all. One minute you’re making your scrambled egg mixture, the next minute the eggs have stuck and burnt to the bottom of the pan and you’re considering throwing it out.

Luckily for you, cast iron skillets are nothing to be afraid of. They are versatile pieces of kitchen equipment that can last years if treated properly, and they can cook anything from steak to cakes - you just have to find the right product for you. This is why we have found the best cast iron skillets on the market to help you to become more confident in your cooking!

Starting off with our recommended products is the Zulay Kitchen cast iron skillet. This product has a diameter of 12”, which is the average-sized skillet for most cooking needs, and can be used on a grill, stove, oven, and over a campfire.

This skillet is made of high-quality iron from professional craftsmen, which is designed to withstand and retain high temperatures at an even distribution across the surface. Gone are the days of having to move the food around in a frying pan so it can be cooked evenly! Speaking of the surface, this is a pre-seasoned skillet that features two oil-based layers, which works somewhat like a non-stick coating.

This is a sturdy and heavy skillet weighing 7.2 pounds that is designed for ultimate durability. It comes with both a handle and an assist handle for those who find the skillet too heavy. To clean it, this skillet only needs to be wiped and rinsed with warm water and a brush before being pre-seasoned again. It is compatible with any metal kitchen tools, such as a spatula or tongs, as the hardy design is resistant to scratches.

If you’re a new homeowner or a beginner in the cooking world, cast iron skillets can look like an expensive and unnecessary purchase. This Utopia Kitchen skillet, however, is ideal for those on a budget looking to take their cooking skills to the next level.

At 12.5” wide in diameter, this is the ideal size for cooking an array of foods either on the stove, in an oven, on a grill, or over a campfire. It is equipped with both an ergonomic handle and an assist handle to help users hold the 8 pound weight - though this product doesn’t come with a handle cover, so make sure to use oven mitts to prevent burnt hands.

This cast iron skillet comes pre-seasoned with one layer of soy-based oil to provide a layer of non-stick protection. As it is only one layer of pre-seasoning, you must make the effort to regularly season it to prevent food from sticking. The oil is coated evenly, which further helps to evenly cook your food as the skillet retains and distributes heat across the surface.

These skillets weigh 15.3 pounds, which is slightly heavier than the other products on our list, which is due to their high-quality craftsmanship. The thick and durable cast iron material distributes heat evenly for a smooth and fair cooking experience, and can be used to fry, broil, braise, bake, grill, and sautée all kinds of food.

Whilst these aren’t dishwasher safe, they can be easily cleaned by hand and seasoned once again. Both skillets come pre-seasoned, which only enhances their non-stick value as they continue to be used.

One of the skillets is 10” wide in diameter and the other is 12” wide, so you can cook with either (or both) depending on how much food is in the pan.

Not all cast iron skillets come with a lid, and it’s not always easy to find a suitable cast iron lid. However, this Cuisinel product comes equipped with a hardy lid which is ideal for cooking meals that tend to spit or that require a cover.

The standout feature of this skillet is its versatility - the lid itself can be used as a cast iron frying pan whilst the deep skillet can be used like a Dutch oven with the lid on top. This versatility is what makes this product so professional, because there are so many things you can do with this skillet.

Cuisinel is one of the top brands of cast iron skillets and kitchen appliances, and this skillet is no exception. Made from professional craftsmen, each skillet and Dutch oven is pre-seasoned and made of hardy materials for a durable and long-lasting cooking experience.

Last but not least, this Backcountry 12” skillet is an all-rounder product on our list. Pre-seasoned with a proprietary oil blend and made from high-quality iron, this is a durable and hardy skillet that is built to last for years.

This skillet can be used on a range of cooking surfaces including grill, gas, electric, oven, induction, broiler, and firepits. It is suitable for cooking an array of foods, from braising meat to suatéeing vegetables. A handy handle cover glove is included to protect your hands from burning on the hot handle, so you can have full confidence in your cooking.

This is an easy-to-clean product that only requires wiping down and light scrubbing with water. Do not put it in the dishwasher or let it air dry, as water will encourage it to rust.

Choosing a surf helmet is an important decision. As a surfer, you have to be able to put full confidence into the product, as ultimately, your safety will be depending on it. The ideal helmet will, of course, vary from one surfer to another, depending on performance level, age and size.

This being said, there is a basic criteria in which every safety helmet should satisfy. Below, we have put together a small guide of the sorts of factors you should be considering when looking for the perfect, protective surfing helmet. 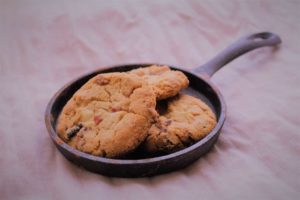 The average size of a skillet is about 12” wide in diameter. Most people find that they don’t need a skillet wider or smaller than this, as these skillets are great for cooking a variety of dishes.

You should consider the size of the skillet in width diameter compared to how much room you have on your stove, grill, oven, or other cooking surfaces - as well as your storage space.

Cast iron skillets don’t come with built-in handle covers like regular frying pans. As cast iron gets hot evenly, you must look to get handle covers to protect your hands from burning against the hot material.

A lot of cooks like to use oven mitts or tea towels instead of handle covers - just make sure not to touch either the assisted handle or regular handle with your bare hands.

Pre-seasoned skillets are much better than regular skillets with no seasoning, as the pre-seasoning process at home can take several hours to a day to perfect. Instead, you should leave it to the professionals.

However, pre-seasoning doesn’t mean you can expect the layers to last for years. Every time you cook and clean the skillet, these layers will wear off. It is important to know how to pre-season your skillet after every use to prevent food from sticking to the surface. This can be easily done by wiping a layer of oil over the clean skillet, which we will talk about in the next section of this guide.

How to clean a cast iron skillet

It’s common knowledge that water and iron don’t go well together. If you leave too much water on an iron surface, it will cause rust. Therefore, the cleaning process of a cast iron skillet isn’t as easy as simply chucking it in the dishwasher or letting it air dry.

Here is how to clean a cast iron skillet:

Other than keeping the skillet dry, the most important step to cleaning a skillet is to season it again. It doesn’t matter whether your skillet was pre-seasoned anyway, because you want to give both the skillet and your food the most protection against burning and stickiness.

You don’t need to use soap to clean your cast iron skillet, but a small amount of mild soap won’t harm it if it needs a good clean. However, never leave it to soak in water and never put it in a dishwasher, as this will encourage rust and force the pre-seasoned surface to deteriorate.

The thing with cast iron skillets is that they will only treat you well if you treat them better. If you don’t clean and season a skillet properly, it will repay you in food that sticks to the surface and rust build-up. Sure, you might have the odd lazy day or two, but to make the most of your skillet, you should clean it properly and regularly.

What to cook in a cast iron skillet

The versatility and durability of cast iron skillets are why they are so often found in restaurants and kitchens of food lovers.

They can cook just about anything on a variety of cooking surfaces, whether it’s over a campfire or in an oven, and the food quality is always brilliant due to the even distribution of heat.

How can you tell if a cast iron skillet is good?

Most of the time, a cast iron skillet will become good the more you use it. Each skillet will work differently depending on how you cook and clean it, so it’s mostly something you learn to adapt to. They’re kind of like a pair of shoes that you need to break into.

What can I use if I don’t have a cast iron skillet?

If you’re looking at a recipe that calls for a cast iron skillet which you don’t have, there are other ways to cook food without one. Most glass baking dishes can be used on stovetops, saucepans are useful, Dutch ovens are great, and any regular frying pan will do the trick most of the time.

We recommend looking into buying a cast iron skillet for future cooking endeavors due to its versatility, because you might find that you don’t actually need to use half of what you have in your kitchen.

What is the best oil to season a cast iron skillet?

It all comes down to personal preference. Most people will opt for a vegetable, canola, or olive oil, whilst some prefer coconut oil. It all depends on what you have in your cupboard and what you feel most comfortable using.

Those on a diet might prefer to use an oil that is less fatty to prevent oily food, so they prefer to use a low-fat and low-calorie oil cooking spray. You can also use butter, which is a good oil for cooking eggs in a cast iron skillet.