Cast iron pans have been used in American kitchens since time immemorial. They’ve been handed down through generations, because they have been known to last those generations. So there has been a tendency to trust cast iron pans on the basis that “My grandma used one every day of her adult life, and she lived to be 93…”

This is a natural reasoning process, but not a sound one. To get philosophical about it, “correlation does not equate to causation,” so plenty of people could use cast iron pans every day of their lives and live many years, without it proving that cast iron pans are safe.

Fortunately, cast iron is relatively easy to dissect in terms of its impacts on health, unlike some of the man-made coatings that gave us our original non-stick pans, like the original recipe Teflon. 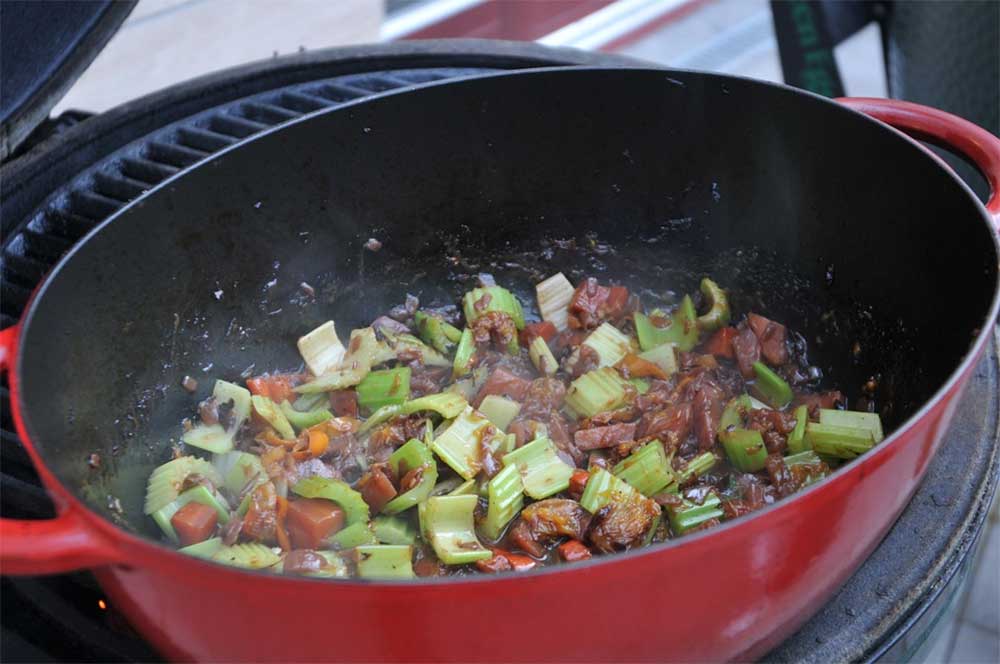 Cast iron pans are for the most part made of … well, cast iron. You knew this. The thing that has caused concern about cast iron pans and health is that with continual use, cast iron pans can lose some of their iron content. Where it goes is obvious – it goes into food, and from food into our bodies.

So the question is whether iron is dangerous when consumed.

But iron is a nutritional element in very delicate quantities. There are many groups for whom too much iron in their system is a very real danger. Men, frequent red meat eaters, and postmenopausal women, for instance. There’s also a more extreme risk of dangerous iron overload in people with hereditary hemochromatosis.

So excess iron – which can include iron oxidized from cast iron pans – can affect different people differently.

It is true that excess iron in the body has been linked to a range of conditions, including Alzheimers, heart disease and colorectal cancer. And part of the point that makes iron an issue is that once it’s been absorbed into our system, it doesn’t go anywhere, it just sits there, accumulating, behind the scenes.

Men and postmenopausal women need roughly 8.7 mg of iron per day to stay healthy. Women between the age of 19-50 need 14.8 mg per day. More than that and we can be absorbed too much. So, does the use of a cast iron pan contribute to harmful iron excess in the body? Not necessarily – but possibly.

The answer then is that excess iron in your diet is unsafe however you get it, but that cast iron pans, while within safe levels themselves, can act as a contributory factor to excess iron, with any of its associated health dangers.

There are three answers to this question: the Groucho Marx answer, the technical answer, and the complicated but useful answer.

The Groucho Marx answer to whether cast iron pans make you sick would be “It depends how hard you get hit on the head by one.”

The technical answer is no – cast iron pans, in and of themselves can’t make you sick. Excess iron absorbed into the body can make you sick. On their own, cast iron pans, used for instance once a day, are unlikely to add enough iron into your system to make you sick unless you have a pre-existing condition like hereditary hemochromatosis, in which your body is significantly more efficient at absorbing iron than most people’s.

The complicated but useful answer is that we all have a useful daily amount of iron we should absorb to keep us healthy – iron attracts electrons and helps us function. But too much iron absorbed on a regular basis can build up and lead to health issues, including Alzheimers, heart disease and colorectal cancer. How you get the iron into your system is moderately irrelevant. Once it’s absorbed, then yes, it’s been linked to these health issues.

Rather than simply avoiding cast iron pans though, we should ideally have an iron intake management plan – take multivitamins without as much iron, take more chemical compounds that can stop the body absorbing as much iron – such as coffee! – and simply add iron to the list of things you check on the ingredients list of your foot – sugar, saturated fat…iron.

Do cast iron pans cause Alzheimer’s?

Not in and of themselves, no. Excess iron absorbed in the body has been linked to Alzheimer’s, as well as heart disease and colorectal cancer. Using cast iron pans is not by any means causal when it comes to Alzheimer’s, but we only need a small amount of iron per day to stay healthy – just under 9 mg per for men and postmenopausal women and 15 mg per day for women between the ages of 19-50 (or, more accurately, menstruating women, whenever they start and stop). Anything beyond that that gets absorbed is stored in the body, and can lead to Alzheimer’s and the other associated health risks.

Technically then, an excess of iron is the dangerous thing, rather than the use of particular pans – you can get multivitamins that contain 100% of your daily iron needs, which means anything extra, like the iron in some breakfast cereals, and the iron that can transfer to foods, and then to our bodies, from cooking cast iron pans is extra on top of our daily dosage, and potentially harmful in the longer-term. But to label one thing, like cast iron pans as a cause of Alzheimer’s, rather than also including the likes of the breakfast cereal and the multivitamins, is to unfairly simplify the question.

Yes, cast iron pans can significantly increase the amount of iron going into our systems on any given day when we use them, but switching to low or no-iron multivitamin, lowering our consumption of iron-rich foods like red meat, and checking the iron content of processed foods like cereals can all also play a part in pushing too much iron into our systems.

Yes and no. On the one hand, regularly using cast iron pans significantly raises the amount of iron that we take into our bodies on a daily basis – unless we also take in chemicals that can stop the absorption of iron into the system, like coffee. Excess iron in our systems has been linked to Alzheimer’s, heart disease, and colorectal cancers.

It’s also true that too much iron in our system has been associated with the production of free radicals and an increase in the quantity of oxidants in our system – neither of which are especially great from a health perspective.

A study published in Cancer Research in 2014 included 309,443 participants, and concluded that high serum iron (iron in the blood) was a risk factor for certain types of cancer, including liver and breast cancer.

It’s worth remembering though that risk factors and causal factors are not the same thing, and that the amount of iron getting into your system through cooking in cast iron pans will differ significantly depending on what you cook in them. The iron gets from pan to food by a process of oxidation which will be much more potent in the presence of certain acids, like those present in tomatoes and wine.

So – fresh marinara sauce or boeuf bourginon? Less of a friend to your daily iron intake when cooked in a cast iron pan than, say, a burger or meat loaf would be. It’s also true that good seasoning of your cast iron pan with oil will cut down the degree of iron transfer from pan to food and food to body, though it won’t cut out the transfer entirely.

So while it would be misleading to directly say cast iron pans ‘cause health problems,’ there is no argument that using them – especially for dishes that are high in acids, or for dishes where the food sits in contact with the iron for a long time – is an effective way of adding more iron into your body, and excess iron in your body has been identified as a risk factor in some cancers, as well as Alzheimers and heart disease.

Do cast iron pans have lead in them?

There’s a line of separation that needs to be drawn on this question between old-fashioned, solid, cast iron pans, and the newer, enameled cast iron pans on the market.

Ironically, older, straightforward cast iron pans are unlikely to have lead in them, because it was and is unnecessary to the production process. It’s also worth remembering that lead has a much lower melting point than cast iron, so if there were surface or easily-freed (which is to say dangerous) lead in a standard cast iron pan, the strong likelihood is that it would turn to liquid and separate from the pan the first time you really fired up the pan.

What has been found – and found in quite heroically dangerous quantities - is a cadmium-lead cocktail in some enameled cast iron pans, though this is mostly in the decoration on the pan – which can include the color – rather than the cast iron itself. Obviously, it would be better to remove high levels of cadmium and lead from any food preparation vessel, so if you’re tempted to use highly decorated enameled cast iron pans, and especially if you’re going to serve food from them to pregnant women, test out the enameled pan with a cotton swab or commercial lead test.

Yes – high levels of serum iron have been described as risk factors in several types of cancer, including liver and breast cancer, in a study published in 2014 in Cancer Research.

Cast iron pans can certainly act as a way of getting more iron into your system, especially when used with highly acidic foods and liquids, including tomatoes and wine, because those acids help oxidize iron out of the cookware and into the food – and onward into your body.

So there’s an undeniable path that leads from cast iron cookware to a risk of increased systemic carcinogens and the damage they cause.

However, it’s worth keeping in mind that it’s the iron, rather than the cookware, that’s the issue, and that serum iron levels can be raised by all sorts of things – including multivitamins and breakfast cereals – as well as by the levels of iron transferred to your system through cooking in a cast iron pan.

For most people, most of the time, cooking cast iron pans is relatively safe and gives great results. It’s possible that we need to take a closer look at our iron consumption overall, in the same way we now monitor our sugar and trans fat intake, but cooking with cast iron pans is only one part of the overall picture.